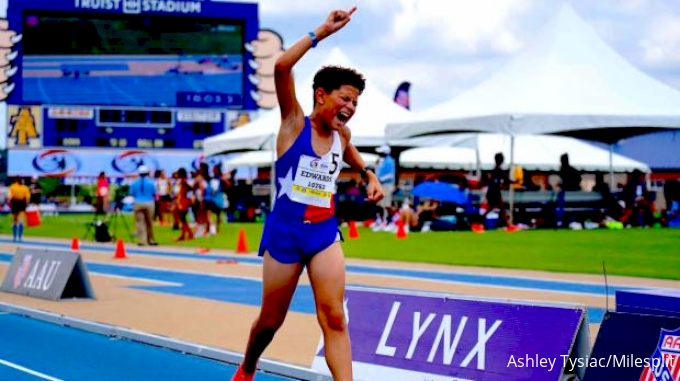 GREENSBORO, NC — Day two of the AAU Junior Olympics on Sunday was more or less the same at North Carolina’s A&T Stadium, with the climax of multiple events to accompany the longer walk finals.

The end of the weekend also featured his first national AAU record, with an Illinois-based athlete Heather Durant — a qualifier for the Under-20 World Championships — winning the 3,000m walk record (read more in the summaries below).

For more content from the weekend, visit all the sections below.

9-year-old girls triathlon: audriana carr, competing in her first-ever track competition, won with a total of 908 points. She was particularly impressive in the 200m, passing in 30.80 seconds.

Triathlon boys 9 years old: Cameron Cay of Topeka, Kansas became a national champion with 655 points. His best event of the day was the shot put with a 25-08 throw to score 356 points. Cameron Turner of Virginia Beach, Va., was second with 562 points and scored big in the high jump and shot put competitions. georgia Charles Fourr won bronze with 508 points.

Girls 10 Triathlon: Brielle Hudson (Cornwall, NY) was back, winning her second straight triathlon title with 1,341 points. She was only 62 points away from setting a new national record. Ayla Cromedy (Abington, Pennsylvania) finished second with 1,310 points.

Triathlon boys 10 years: Aedyn Etheridge (Olathe, Kansas) and Jahmaikel McKenzie (Leander, Texas) were the only boys today to score over 800 points. McKenzie finished with the gold medal with 850 points, while Etheridge was second with 813 points, respectively. Kaden King (Indianapolis, Ind.) tallied 757 points in the high jump, shot put and 400m.

11-Year-Old Boys’ Pentathlon: Jonathan Johnson (Fairburn, Ga.) topped the overall standings, earning a winning score of 2,391 points. He racked up 799 in the 80 mH after his time of 13.65. Legend White-Thomas second second with 2,260 points.

11-year-old Girls Pentathlon: It was a tight competition in this event between Mylan Clay and Kennedy McCarter. Clay finished the day leading with 2,543 points. She scored big in the 80mH when she clocked 13.27 to earn 952 points. McCarter was 27 points behind with 2,516 points. from michigan Blake Ruffin won bronze with 2,237 cumulative points.

12-Year-Old Women’s Pentathlon: Less than 60 points separate first from second, with Ava Fanchi (Tampa, Fla.) winning the overall title with 3,110 points. She was particularly powerful in the 80mH, where she ran the fastest time of the heat at 12.59 seconds. Khloe Washington (Wichita Falls, Texas) was second with 3,053 points and Isabella Alvarez (Absecon, NJ) was third with 3,043.

Heptathlon Girls 15-16 years old: Behind a victory in the 200m and performances as runners-up in the 100mH, long jump and 800m, Yierra Flemmings (Cameron, Texas) won the AAU title with a total points of 4,581. Not too far behind her was Brianna Rivers (Houston, Texas) with 4,507 points, including 916 points earned in the high jump – she clocked an impressive 5-8.75.

Decathlon boys 15-16 years old: Logan Anderson (Edinboro, Pennsylvania) pocketed a big victory with a final score of 5,865 points. He finished with the second fastest 1,500m of any athlete, with a time of 4:47.57. Swayde Griffin (Lago Vista, Texas) finished second with 5,748 points.

15-16 years old Boys 3,000m Racewalk: It was a battle to the finish line between Brock Schweikert (Columbia, Missouri) and Judah Edwards. But it was Schweikert, the defending champion, who made a late push to win in 16:53.82. Edwards (Leander, Texas) was second in 16:55.83 while Marc Batista (Windsor Mill, Md.) crossed the finish line as the third-best finisher in 19:38.38.

STAT OF THE DAY

MVP OF THE DAY

QUOTE OF THE DAY

“Do you have a favorite Olympian, role model or inspiration?”