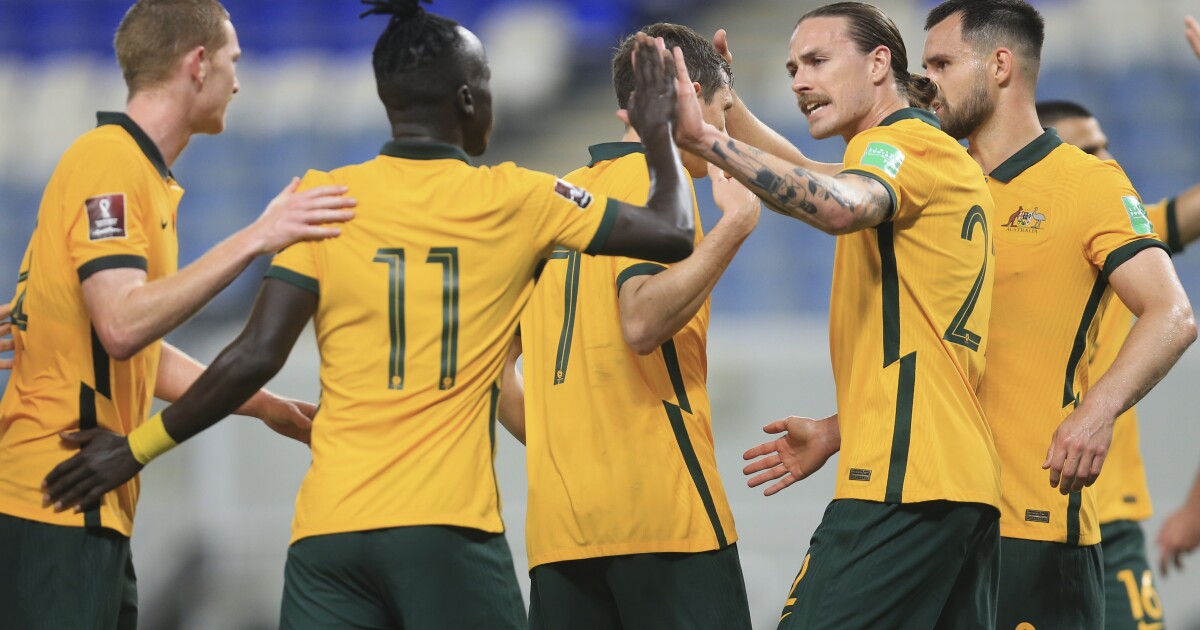 For Australia, it is a final double blow for a place at a fifth consecutive World Cup. For the United Arab Emirates, it’s a chance to get one game closer to a first World Cup appearance since their debut in 1990.

There will be no second chances when the Socceroos and the United Arab Emirates meet in Qatar on Tuesday for the right to face Peru six days later in another qualifier with a place alongside France, Denmark and Tunisia in Group D of the World Cup. stakes.

Both teams finished third in their groups in the Asian qualifier, leaving them in contention to meet fifth-placed South America.

After taking maximum points in the first three games of the third round of the Asian qualifiers – extending their winning streak to 11 games – Australia have won just one of their next seven games to finish behind Arabia Saudi Arabia and Japan in the group.

It meant another knockout route to the World Cup. But unlike last time, when Australia beat Syria and then Honduras home and away in continental and intercontinental playoffs, both games will be up for grabs and both will be played in Qatar.

“That would mean everything,” said Australian head coach Graham Arnold, Guus Hiddink’s assistant when the Socceroos played in the 2006 tournament. “I don’t want anything more in life right now than to qualify for the World Cup – for the players and for the nation.”

Australia warmed up with a 2-1 win over Jordan in a friendly last week, only their second win in eight games. With Scottish champions Celtic’s star player Tom Rogic retiring for personal reasons and former Premier League regulars Aaron Mooy and Mat Ryan short of playing time, preparation hasn’t been ideal.

Arnold said playing 14 of 18 qualifying matches away from home due to Australia’s strict travel regulations at the height of the COVID-19 pandemic helped the team bond for what has become a familiar road to the renowned football tournament.

For the UAE team, being close to home is a motivation.

The national football federation bought more than 5,000 tickets for fans making the short trip to Qatar for the qualifiers, all of which were quickly purchased. They hope to be back there in November when Qatar hosts the first World Cup in the Middle East.

Rodolfo Arraubarrena, who replaced Bert van Marwijk as UAE head coach in February, started well when he led the team to victory over already-qualified South Korea to seal a third-place finish in the his group.

“Our confidence in ourselves is great,” said UAE captain Walid Abbas. “We have players who have enough international experience to handle any pressure.

“But it’s 90 minutes, in which the team best able to deal with those pressures and most successful in exploiting the opportunities, will win.”

The UAE recalled 2016 Asian Player of the Year Omar Abdulrahman to the squad. The veteran playmaker, who has struggled with injuries in recent years, will reunite with Ali Mabkhout.

Mabkhout, 31, has scored 81 international goals, more than the Australian team combined, with their last 1-1 draw against Gambia on May 29.

He scored the goal that gave the United Arab Emirates a 1-0 victory in the quarter-finals of the 2019 Asian Cup, knocking defending champions Australia out of the tournament.

“I think the two teams are even, based on the tight games over the past few years and the fact that we both finished third in our respective groups,” Mabkhout said. “Being just 180 minutes away from a World Cup is an opportunity that doesn’t come around too often. Our fate is in our hands.”