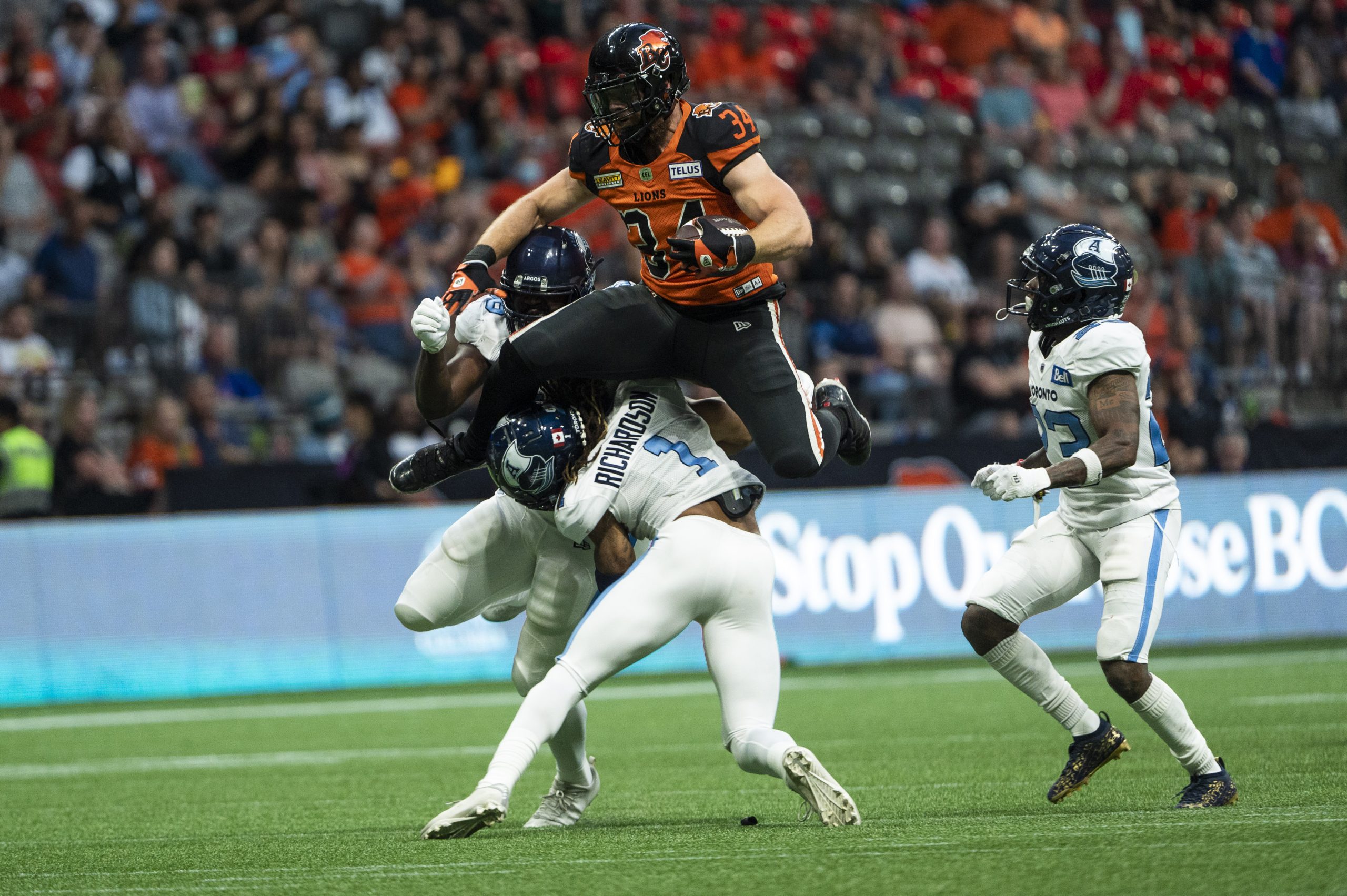 Fullback David Mackie couldn’t remember the last time he made 16 runs in a single football game.

Coming off a dominating 44-3 win over the Toronto Argonauts last Saturday night, the BC Lions captain said the last time he played as a defenseman was probably back in high school.

“It’s been the most fun I’ve had in a long time. I understand my role in the team, I appreciate my role in the trust I have from the coaches, that’s the nature of playing at the back where there’s such a big part on blocking,” Mackie added.

When fullback James Butler went down after a massive collision with Argos’ Wynton McManis, Mackie took charge of all runs for the rest of the game – every fullback’s dream.

“It wasn’t like I had an ounce of nervousness, it was just kind of like, it’s trusting the big boys and Nate [Nathan Rourke] was so quiet there too. It just makes it easier for me,” recalls Mackie.

He finished the game with 16 carries for 90 yards and a touchdown in the 4th quarter, including some big runs to move the chains forward on offense and a hurdling game he won’t soon forget.

Mackie jumped over defender Shaq Richardson and was quickly circled by two more Argos on the way down.

The 6’2” fullback has once again shown his athletic ability, the last time he tried to get past the defender was in 2019 against the Hamilton Tiger-Cats. Despite losing the football, he humbly gives full credit to his strong offensive line for him.

“If it was JB [James Butler], he would have been in the end zone. The O-Line did a spectacular job and the left side opened up without much thought. I went up and unfortunately lost the ball, I even think I lost the ball myself,” he said.

Although the offseason practice paid off for Mackie, he hasn’t forgotten the fumble that caused the team to lose the ball.

“A lot of surprise from the locker room that I can jump so high so fast. Once in a while you just have to remind everyone that I’m not a big prick,” he laughed.

“It’s not something I’ve struggled with, but it’s something I’m going to lose sleep over. Especially with a day that our offense has had and for our only turnover to be that- It’s like a black in the game for me, so I’m not going to forget it.

With the weather warming up recently, Mackie is on the golf course with his teammates in his free time. This year, with the addition of placekicker Sean Whyte and defensive end Mathieu Betts, more and more Lions are bonding on the golf course.

“We’re lucky to have some pretty awesome community partners and it’s cool because golf is so different from football. There’s a good group of us on Sunday and there’s a scoreboard on the side of my locker where everyone submits their scores,” Mackie said.

“Some are really good and some guys are trying really hard. I’m going to throw someone under the bus. Scarf [Jacob Scarfone] hits the range, he does everything he can. Tanner [Doll] just broke 90 for the first time. Sean Whyte kind of has the crown right now but I know Flintoft is coming for that, Peirson is coming for that too.

Outside of football, many Lions try to improve their golf game on their days off, but there will always be the temptation to upgrade golf equipment.

“I love my TaylorMade p790 irons. I love my Cobra driver, I hammered the old one but it still works. He still goes almost 300 meters each time. If it is not broke, do not fix it. Sorry Joanne if I’m spending too much, but I’m loving my setup right now,” Mackie said.