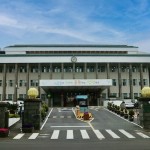 Casino destination Jeju is still pondering the ‘pros and cons’ of seeking to offer online gambling through its foreigner-only brick-and-mortar casinos, as the semi-autonomous South Korean vacation island grows recovering from the loss of in-person tourism amid the Covid-19 pandemic.

The information was given to GGRAsia during the latter’s visit to the seat of the government of the special autonomous province of Jeju (photo).

Jeju has had its own regulatory rules for casinos since 2009. The island currently has eight licensed casinos, but five of them are currently temporarily closed, coinciding with the downturn in tourism amid the pandemic.

According to Alex Park Jeung Yeon, Deputy Director of the Jeju Government’s Casino Policy Division, in comments to GGRAsia, the idea that Jeju’s “bricks and mortar casinos” can “offer gambling to internet distance to overseas customers” is “currently under review”, in terms of “advantages and disadvantages”, with any “disadvantages” to be considered.

This division of the Jeju government coordinates local casino regulation.

The possibility of allowing remote gambling in South Korean casinos was raised in October by a member of the Culture, Sports and Tourism Commission of the National Assembly.

A policy forum hosted by the Jeju government in November heard a number of South Korean academics suggest that online gambling services should be considered through Jeju’s brick-and-mortar gambling sites, using payment methods including blockchain.

Such a decision would require the approval of the national government. The country’s leadership changed on May 10, when Yoon Suk-yeol took office as South Korea’s president, following an election in March.

Nonetheless, the head of Jeju’s Casino Policy Division seemed to rule out in his comments to GGRAsia the possibility of allowing South Koreans to gamble in the island’s casinos.

Mr Park described the notion as “typical media manipulation” and based it on a single sentence in a written presentation by a panelist at the November policy forum.

The official said, referring to the early days of the island’s casino industry, “Before, Jeju’s casinos had an infamous image, so we focused on ensuring safe and clear transparency regarding Jeju casinos, through control and support.”

South Korea’s National Gambling Regulatory Commission – under the Ministry of Culture, Sports and Tourism – also has a role in overseeing Jeju, in terms of monitoring total casino sales and control of any attempt to operate illegal casinos there.

The Jeju Casino Policy Division is responsible for overseeing the day-to-day operations of the casino, including inspecting machine gaming functions such as return-to-player percentage; video security analysis for tabletop games; and approval of new games.

One area the local policy division has looked at is the idea of ​​a “casino license renewal system”, Mr Park said.

Currently in South Korea – in the absence of a specific law to regulate the casino industry – a casino license once issued, is valid indefinitely.

The Casino Policy Division said it suggested to the Ministry of Culture, Sports and Tourism that there should be a time limit for such licenses. There has been “no progress so far” on the issue, the Jeju official said.

In other discussion topics, the Jeju regulator mentioned the importance – in the post-pandemic recovery period – of attracting tourists and foreign customers for the island’s casinos, beyond Japan and from China.

“For our tourism strategy after the end of the Covid-19 pandemic, we would like to focus more on attracting Mongolian and Vietnamese tourists, because these countries have a large group of Korean culture and Korean wave fans.” , Mr. Park said, lately referring to the popularity across Asia of South Korean pop music and TV and film dramas.

Visa-free access to Jeju for holders of certain passports will be restarted June 1after a break of more than two years.