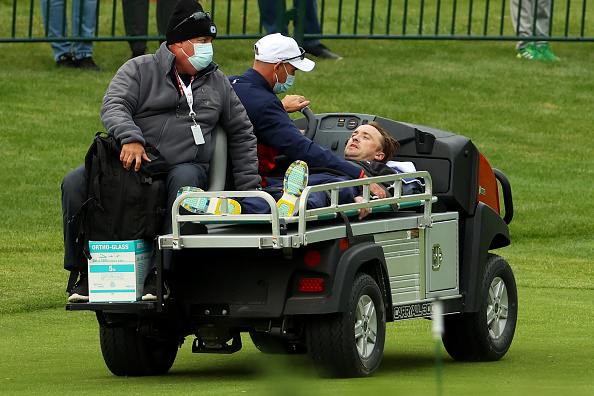 The 34-year-old actor best known for playing Draco Malfoy in the Harry potter The film series was transported to the Whistling Straits course in Sheboygan, Wisconsin on Thursday afternoon at the 18th hole.

After receiving immediate attention from tournament officials, Felton was stretched out on a cart and whisked away for further treatment as worried onlookers cheered on the actor as he was whisked away.

There is no immediate update on his condition, although Felton appeared to be conscious when he was taken away. Felton’s team have yet to comment on the situation.

Thursday’s Celebrity Game is part of the week-long schedule of events for the 43rd Ryder Cup, a biennial golf competition between teams from Europe and the United States that kicks off this weekend. The tournament is named after English businessman Samuel Ryder, who donated the trophy.

Felton, who turned 34 on Wednesday, was also known for appearing in the TV series Flash and the movie The rise of the planet of the apes. For his birthday, he raised funds for the Jed Foundation, a nonprofit organization dedicated to protecting the emotional health of American teens and young adults.

Felton is passionate about golf and has participated in several tournaments over the years. He was pictured reuniting with another Harry potter actor James Phelps, who played Fred Weasley, for the games last year.

He was only 14 when the first film came out and was catapulted to worldwide fame for his landmark role and the following seven films.

His grandfather, Nigel Anstey, made an appearance in the first film,
Harry potter and the sorcerer’s stone, as an anonymous Hogwarts professor. Felton posted an Instagram clip of himself earlier this year watching the film and watching his grandfather onscreen.