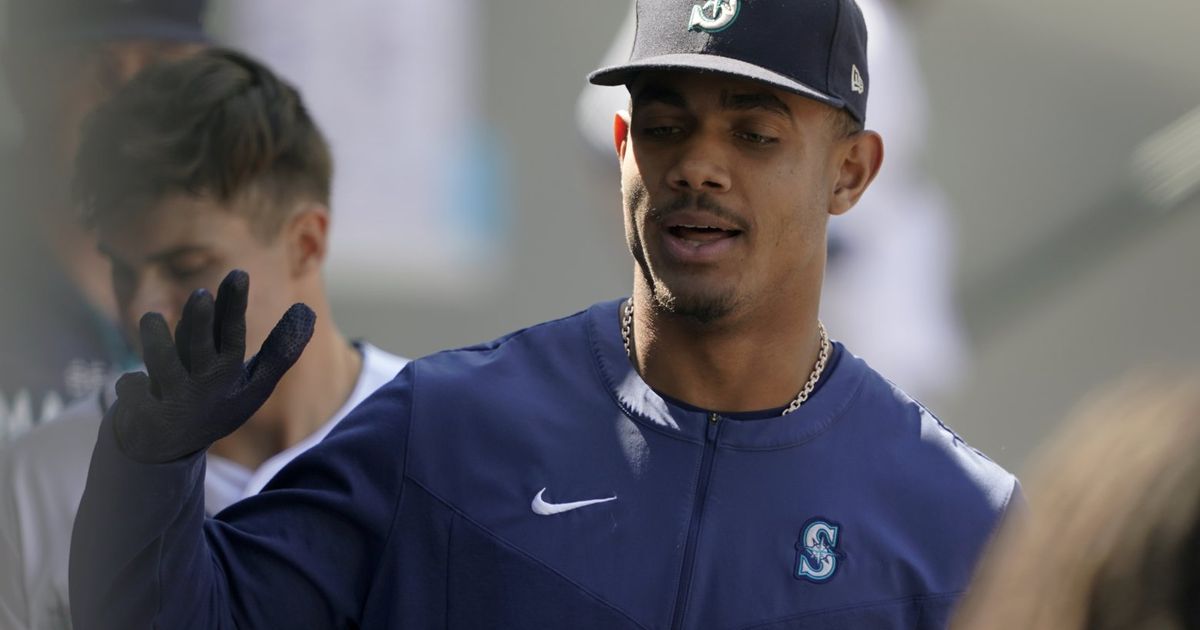 Julio Rodriguez arrived at the clubhouse on Monday ready to do more than sit in the practice room. The Mariners All-Star center fielder wasn’t in the lineup for a fourth straight game due to left wrist soreness, but was happy to be off to participate in some of the daily practice pre-game.

“I’ll try to swing a bit and see how it feels,” he said. “Things are much better today. I would like to be there. We are cautious, but if I can get to a point where I can play, I will.

Rodriguez had his wrist taped with blue athletic tape that wrapped around the thumb for extra support.

“Julio is better,” manager Scott Servais said. “He is definitely going in the right direction. Very, very optimistic that we could see him in the lineup tomorrow. So that’s why I’m shooting here. You probably won’t see him in tonight’s game anytime soon. But I hope he does a little more baseball today and I’m optimistic he can be there tomorrow.

Rodriguez played with his teammates and did some defensive work in the outfield, but he didn’t hit on the field, opting to hit inside the Mariners’ goals.

When asked what he needed to see from Rodriguez to feel comfortable putting him back in the lineup, Servais was candid.

But Rodriguez wasn’t the only everyday player missing from the roster. Left fielder Jesse Winker was also out with sore right ankle after rolling it in a collision behind first base with Astros shortstop Jeremy Pena.

“He’s not limping or anything, but we thought it best to give him the day off,” Servais said.

While Winker might be available to pinch the blow, the Mariners would rather he receive ankle treatment and not play if possible.

“If we could, yes,” Servais said. “In a perfect world. I would like to win the game, 8-2, and not have to worry about it. We don’t usually play a lot of those games, but maybe it will be that night.

With their lineup setup, Servais was forced to pitch Adam Frazier in left field, Dylan Moore in center field and Sam Haggerty in right field. The primary position of all three players is second base.

“The first thing I thought about the roster today, ‘Yes, I have three second basemen in the outfield,'” Servais said. “It’s a credit to these guys. They did a very good job. Dylan hasn’t played center much in his career, and he’s been pretty good there. Frazier handled everything thrown at him and Haggerty isn’t a professional outfielder, so to speak, but he handled it well.

Mitch Haniger, Taylor Trammell and Evan White all took early batting practice on the speed thrower, then more hits on coach Tony Arnerich. All three players are on the injured list and ready to return to action.

Haniger, who is recovering from a severe right ankle sprain, is three games away from his rehab assignment. He spent the weekend playing for High-A Everett. Haniger started as the designated hitter on Friday and Saturday, then went five innings in right field on Sunday.

He had a hit in every game, including a solo homer on Sunday.

“It was a long layoff,” he said of his timing with his swing. “I know for me, usually coming out of spring training, it takes me a little while. [to find it].”

He had ankle pain after playing in games.

“Any time you get injured, the first week or so, there’s pain and that’s normal,” he said.

Haniger will return to action Tuesday with Class AAA Tacoma to continue his rehab with the Rainiers. It is not certain whether he will take the 20 days of the rehabilitation mission. And there isn’t a specific number of at-bats or sensations with his swing that will tell him he’s ready.

“He’s really, really aggressively moving forward and he’s got his run back,” Servais said. “I think you’ll probably see him in rehab when we hit the road [Thursday]. I can’t wait to get it out there and play it. It just gives us more options because we’re a little short on the outfield right now.

White (sports hernia surgery) is nearing a rehab assignment after suffering a setback in his recovery during a rehab stint in June.

White said the preliminary plan is to begin rehab Aug. 2 when Tacoma begins a five-game series at Sacramento. He could probably start the mission sooner, but his wife, Kari, is expecting the birth of their second child next week.

206-464-2373 Where [email protected]; on Twitter: @RyanDivish. Ryan Divish covers the Mariners in Seattle and on the road. Look for his “Extra Innings” podcast and his weekly Sunday mailbag during the season.