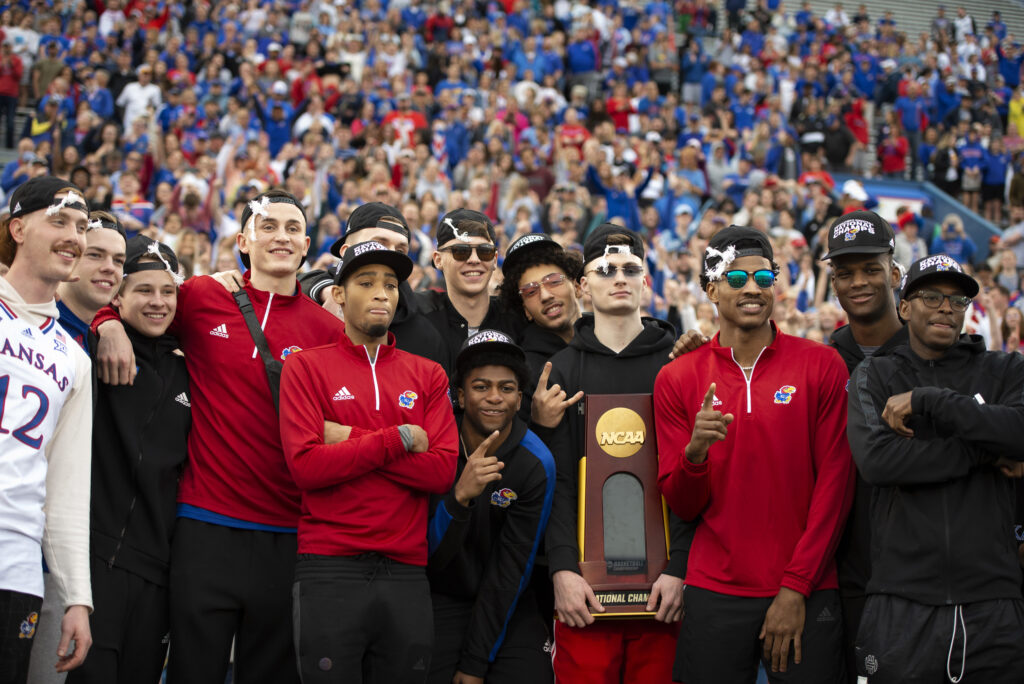 Kansas Reflector welcomes opinion pieces from writers who share our goal of expanding the conversation about how public policy affects the daily lives of people across our state. Eric Thomas directs the Kansas Scholastic Press Association and teaches visual journalism and photojournalism at the University of Kansas.

When we think of “back to basics” at a college or university, we think of fall football games, Main Street parades, and returning alumni.

College athletics offers another kind of “homecoming” for a lucky team in every sport: when they return from any neutral site on campus to celebrate their victory. Professional sports, especially baseball and basketball, often end the season with the champion winning his last game in front of his home crowd. College sports rarely crown their home champions.

So on Tuesday, the NCCA champion Jayhawks made their comeback.

The men’s basketball team returned to Lawrence and stood at the 50-yard line at David Booth Kansas Memorial Stadium to hear fans react to their Monday night win over the University of Carolina Tar Heels North, 72-69, at Caesar’s Superdome. in New Orleans.

The stadium was open for free to all fans, especially university students. They enjoyed a day of classes that, although not officially canceled by the university, were often “optional” or canceled by the instructor. Many players followed Bill Self’s turn on the microphone, thanking their fans for believing in them.

Of course, the players had danced under the confetti on Monday night in New Orleans. But hoisting the trophy to Lawrence on Tuesday meant hometown fans wouldn’t wait until the fall, when the Jayhawks unfurl a sixth national championship banner, to celebrate.

Through its opinion section, the Kansas Reflector works to amplify the voices of people who are affected by public policies or excluded from public debate. Find information, including how to submit your own review, here.

Could Insomniac create its own Marvel gaming universe?