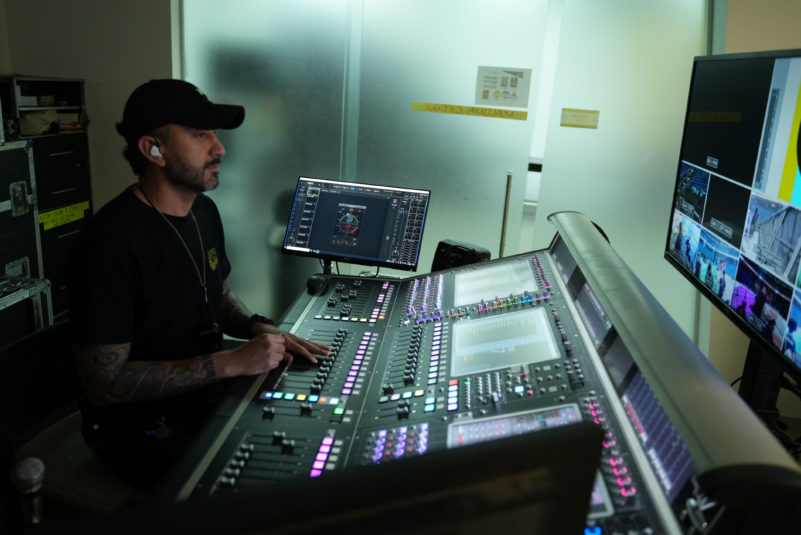 “I’ve been using Waves plugins consistently for 11 years,” says FOH Lucas Pinzon,” and today they are essential to my work on every show. I use them on my DiGiCo Quantum 338 console through its Waves IO port and the Waves SuperRack live plugin rack, and it’s amazing how I can be creative using this setup. It gives me incredible agility, where a split second is vital to getting what I want in a live performance environment.

“I have several favorite plugins,” he comments, “and these are just examples – a few of my go-tos that help me deliver great sound every night, in venues around the world. complicated acoustics. The F6 floating band dynamic EQ is a great tool, because not only can I EQ precisely, but I can also compress band by band as needed. Of course, F6’s real-time visual analyzer renders everything visually faster. The Scheps Omni Channel is a Swiss army knife that I use a lot in my channels. I love it! In addition to having a very pleasant color and texture, it is totally customizable. It helps me to build a unique sound, according to my criteria and taste. I can also include it as an external plugin in the internal chain. The PSE (Primary Source Expander) is a MUST to clean my voice from disturbing microphone leaks! eMo D5 Dynamics is an awesome and versatile plugin that I use read as a starter when I need to go fast for some dynamic requirements. The CLA compressor/limiters are spectacular: CLA-2A on bass and vocals, CLA-3A on my guitar bands and CLA-76 on my drums – the possibilities are endless. I really appreciate the particular sound and color of the dbx® 160 Compressor/Limiter because it leads me to a sound that I have engraved in my memory since the analog days, with a unique punch and precision. Finally, the Abbey Road TG mastering channel is simply exquisite, an absolute work of art.

Pinzon continues: “In this 360 degree show, the acoustic energy is very impressive, in that all the microphones are open and located literally under the sound system, so I take great care of my gain structure as the basis for everything. Plugins with which I can literally “clean up” the sound are my secret weapon for being able to mix this show. I use the eMo D5 dynamics, PSE, CLA 76, WNS Noise Suppressor for vocals and the NS1 Noise Suppressor for acoustic guitars.

German Instructor Engineer Tarazona commented: “For me, SuperRack was a new world and a complete game-changer for my in-ear monitor mixes. This is my first tour using DiGiCo with Waves integration, and it was my best decision. I control from the console all the parameters of the plugins I select, which allows me to be more precise when changing during the concert.

“For this tour, he continues, I’m using a DiGiCo 338 console with a Waves IO port, two SoundGrid Extreme-C servers for redundancy and a Mac mini for my SuperRack. During rehearsals, I like to use the touch screen. It allows me to navigate really quickly, but during the show I’m very careful with every step I take, so I prefer to use the Touch and Turn button on my DiGiCo to change settings for my plugins. This is an amazing benefit of SuperRack’s integration with DiGiCo. I’m also privileged to have a vocalist and band who are very tech-savvy, so with every plugin I use, we explore it as a team so everyone enjoys the process of their instrument. What also reassures me is that they do not feel any latency in their mixes.

The use of Waves plugins is an integral part of Tarazona’s workflow: “PSE is an essential plugin in my vocal chain; it really helps me control my 360 stage environment. Also, my two backing vocalists sing under the PA and I can have up to four guest vocalists on stage at the same time, giving me perfect control over their mics on their ears. My secret weapon for drums is the H-Reverb Hybrid Reverb, which allows for depth and very clear space between instruments in in-ear mixes. I also use it on acoustic guitars; one of my favorite effects is the H-Delay Hybrid Delay. Its analog emulation is very real. The C6 multiband compressor is still my favorite multiband compressor for sequences. It allows me to get natural in my ears song by song. I use SSL G-Channel on almost all instruments. It is a very versatile equalizer. Every EQ setting gives me exactly what I’m looking for and its compression and gate feel so real it feels like I’m using a real SSL channel strip at times.

Broadcast engineer Fabrizio Piazzini commented, “We used Waves’ eMotion LV1 mixer to broadcast our show live from Atanasio Girardot Stadium in Medellin, Colombia on Amazon Music Prime and the Amazon Music channel on Twitch. The sound quality of the LV1 is absolutely amazing, nothing compares to it. Open high-end, lightning-fast transients, wide stereo imaging, and nearly infinite headroom. Plus the audio engine is so clean – its stereo imaging is industry leading and the ability to dial in any plugin on any channel really elevates this rig to be the best who’s ringing.

Piazzini continues: “Choosing the LV1 was the most versatile solution. Its portability is unmatched. This allowed me to prepare the mix even if I was on vacation. What other office this size fits in the back of my car with my family and all my luggage for a two week vacation? It was a very strong point for the client because we were working together with songs recorded on previous concerts. Form factor is key in today’s touring, and we could fit two complete systems in half the space of any other console available.
“When it comes to networking,” adds Piazzini, “the LV1 has enormous possibilities. The very fast configuration of the multitrack and the virtual soundcheck changes the game. Our setup is quite simple: Waves eMotion LV1, DiGiGrid MGB, Waves Extreme SoundGrid Server, DSPRO StageGrid 4000, Waves Axis One and Waves FIT Controller. Setup is very quick – 10 minutes and both of my rigs were up and running!”

Piazzini remarks about using the Waves plugins, “99% of the time I just use the plugins that make up the channel strip of eMotion LV1 – the Waves eMo Q4 Equilizer, eMo D5 Dynamics and eMo F2 Filter. They I also use the F6 Floating-Band Dynamic EQ on pretty much any vocal alongside Renaissance Vox, WNS and Sibilance, so for effects the Manny Marroquin Reverb is amazing!

“When mixing for broadcast,” he continues, “spill into vocal mics is a real problem. The Waves WNS plugin is a game-changer for us on that. Normally, you can’t clean vocal mics until it doesn’t really change the tonal balance of the mix. I used to use an expander before, but when the vocal opened up, the EQ drastically changed the whole mix because of the spillage. Thanks to the multiband feature of WNS, I can choose which band I want to use on a specific signal, which greatly reduces mic spill.

“Another fantastic plug-in feature that we use is the F6’s mid-processing with an external side chain. I use it on two specific buses: ambient mics and tape stem. On both buses I use mid-processing triggered by a vocal bus signal, so when the vocalist sings, those frequencies are tamed on both the band and the general vibe, so you’re not fighting with the space in your mix where you end up with vocals louder than they should be. Intelligibility is greatly increased with this tool.

Maluma’s famous live concert in his hometown of Medellín, in front of a crowd of 54,000, has been dubbed “Maluma’s Medallo En El Mapa” concert (a concert to “put Medellín on the map”). The choice of Waves’ live sound setup ensured that this difficult show ran smoothly: “With these tools”, summarize Pinzon, Tarazona and Piazzini: “We had the confidence to deliver the best possible sound.” »