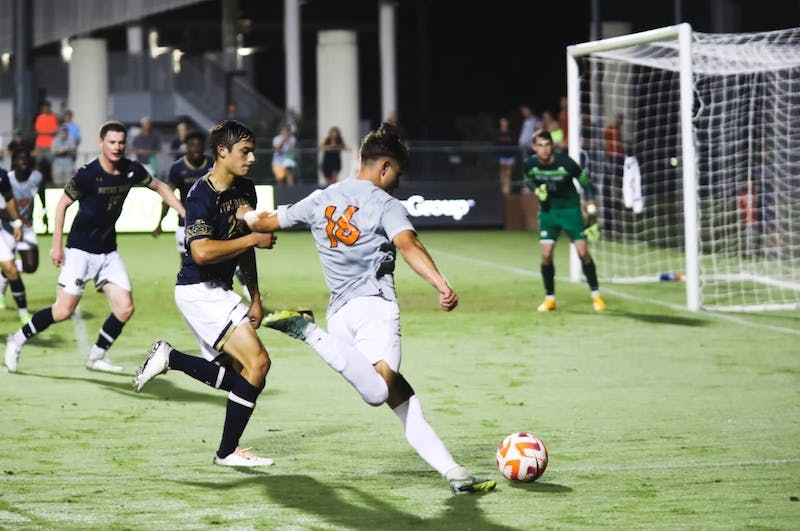 at Klöckner Stadium in Charlottesville. It was a chance for the Cavaliers (4-3, 1-1 ACC) to claim their fifth straight victory at Klöckner Stadium, but the Fighting Irish (2-2-1, 1-1 ACC) were too much for the top of the ACC. – scoring side to handle.

Virginia started the game in a 3-5-2 configuration that she became familiar with to start the season. The Cavaliers made just one change to the starting XI they released in their 5-0 win over La Salle on Tuesday, placing freshman defender Reese Miller on the left wing in place of the second-year midfielder Nils Henry Orywol.

When the game started, the Cavaliers held much of the game’s possession as they looked for their first big chance. That chance came when junior forward Phil Horton received an accurate long ball from Miller in the seventh minute. Horton turned and looked for space up high, but Notre Dame sophomore defenseman Josh Ramsey was quick to commit a tactical foul on Horton before Virginia’s offense could develop. .

Possession continued to control the Cavaliers as the first half wore on, but the home side struggled to do much with it in the attacking third of the field.

The Fighting Irish came close to the game’s first goal in the 23rd minute as senior defender Reese Mayer unleashed a shot from a few yards outside the box. It was a blistering effort, but junior keeper Holden Brown saw it all the way, swinging the ball over the crossbar for a Notre Dame corner.

The Cavaliers’ best chance came in the 35th minute, with a free kick won in the attacking half by senior defender Andreas Ueland. As the ball was tossed into the box, graduate student defender Moritz Kappelsberger leapt above the rest to get his head on it. Kappelsberger eyed the ball towards goal, but rocked the woodwork with his attempt.

It was the last major action of a scoreless first half. The Cavaliers’ defense once again proved to be the backbone, as Virginia held their opponent scoreless in the first period for the fifth time in seven games this season.

The second half opened in much the same way as the first, with neither team showing attacking acumen worthy of a goal. Ueland clipped the top of the crossbar with a header from a corner in the 52nd minute, but the attempt never really worried Notre Dame junior goalkeeper Bryan Dowd.

The Fighting Irish controlled the next part of the match, the highlight coming with a 57th-minute attack. Freshman forward Wyatt Borso made an incisive run and received the ball inside the penalty area. Borso went one-on-one with Brown, but he sent his shot well over the goal frame and found his head in his hands.

In the 68th minute, the Fighting Irish delivered a devastating blow to the Cavaliers from a corner. Notre Dame’s free kick traveled to the middle of the box, where it took an unfortunate rebound into the net of a Virginia defender. The flow of the game had been relatively even until the own goal, which left the Cavaliers looking for an equalizer.

“Really bad luck on the first goal,” coach George Gelnovatch said. “The ball goes through traffic and hits one of our guys and goes into the goal.”

The Cavaliers nearly received their own fortune following a corner kick in the 77th minute. Ueland went down clutching his face after the set-piece, and the referee was asked to check the video for a potential penalty kick. After a brief look, no penalty was given.

Virginia continued to mount the pressure and Kappelsberger came close to equalizing from a corner in the 80th minute. The defender put his head out of the woodwork for the second time in the game, and a rebound effort from Horton was sent in on the right.

The Cavaliers finally found their hero in the 89th minute of the game. Second-year defender Paul Wiese sent a corner into the box that bounced several times before finally finding second-year forward Kome Ubogu, who scored a scrappy goal to tie for Virginia with just over a minute left. to play. The Klöckner Stadium was sent into a frenzy.

Incredibly, however, the score wasn’t over. Notre Dame freshman midfielder KK Baffour led a counterattack as the clock ticked under 10 seconds, outpacing the Virginia defense and netting a fine finish past Brown with just nine seconds left. The goal came just 73 seconds after Ubogu’s equalizer and gave the Fighting Irish a lead they wouldn’t give up.

“We made a mental mistake,” Genolvatch said. “They had one of the fastest guys on the pitch, and we have to make sure we have two or three guys around him and not put ourselves in a position where he comes off like that.”

The referee’s final whistle capped a crushing loss for the Cavaliers, who fell to Notre Dame by the same scoreline as last season. Virginia is now tied 1-1 in the ACC and will surely regret a missed opportunity to stay perfect.

“We don’t deserve this loss today, but we’ll learn from it and move on,” Gelnovatch said.

Virginia is back in action next Tuesday to face American at Klöckner Stadium in Charlottesville. The game will start at 7 p.m. and is scheduled to air on the ACC network.