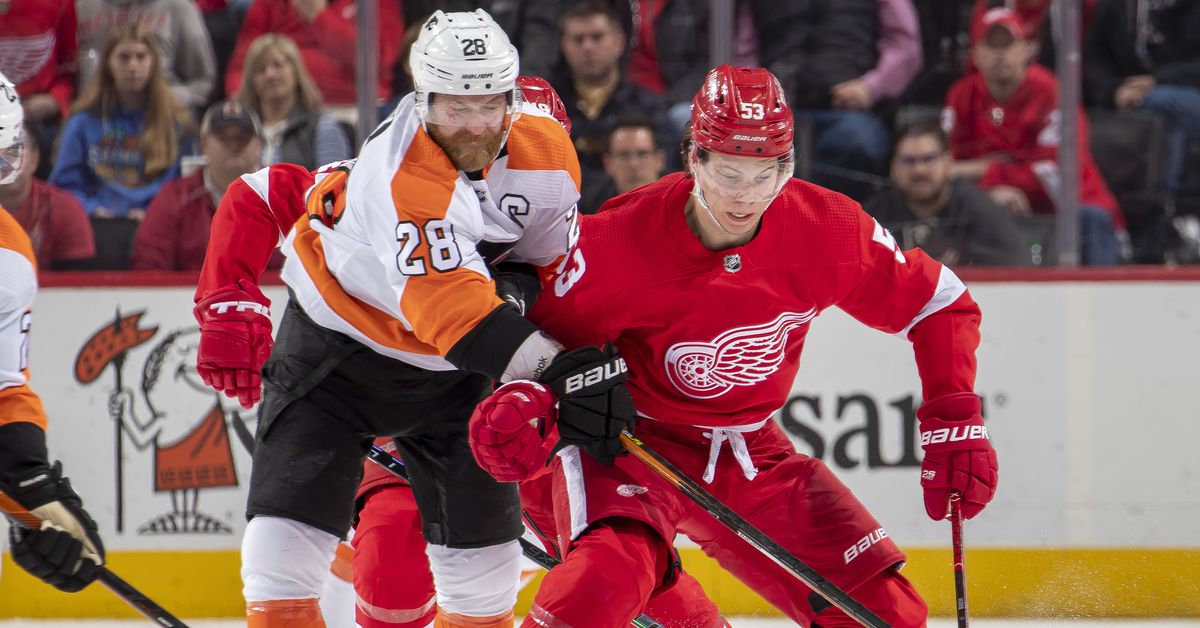 The youth of the Red Wings were once again at the center of what was an unusual game early Saturday at Little Caesars Arena. For one, it was a noon start (weird), and Trevor Thompson was on play-by-play call for Bally Sports (unusual, but I thought he did a good job once he was comfortable). It was also the return of Thomas Greiss, who was brilliant.

This game had a slightly different tempo and theme from the previous one. Philadelphia had the advantage early on, but Detroit opened the scoring just over five minutes later. The so called ‘Guelph Line’ has been so hot lately that it seems like every time they are on the ice something is going on. Robby Fabbri and Tyler Bertuzzi cycled in a nice way to set up a nifty tip to get Bert’s 23rd of the season:

The Flyers had the shooting advantage the entire period, but the Wings avoided any scoring thanks to Thomas Greiss, who was brilliant on his first start in what feels like forever. Greiss made a decisive save early in the second period that stopped Philadelphia from playing:

Near the halfway point of the second period, Detroit managed to create a two-goal deficit for Philly, and that came from one of the guys who needed it the most. Filip Zadina found himself in the right place with plenty of space during a rush with Dylan Larkin and he did what we all know he is capable of:

Thomas Greiss kept busy as Philly kept the pressure on throughout the second period. Greiss made another decisive save on a breakaway, but the game ended up being expensive as Marc Staal fired a hook:

Let’s call it what it is: it’s a weak call from the referee. That would give Philadelphia a chance on the power play that would eventually lead to a goal from veteran Keith Yandle — his first of the season, of course. That goal would come in the final ticks of the second period, so Detroit’s momentum was a bit deflated heading into the final stage of the game.

The Red Wings entered the third period with a huge power play shorthand and finally got their first taste of the power play. In fact, the Wings would get two looks on the power play in the final period. Enough about that, let’s talk about Moritz Seider. The glorious German man landed a seismic power-play goal that would change the tempo of the game:

It’s Seider’s fifth goal and 32nd point of the season. If he doesn’t get away with the Calder trophy, then I don’t know what to think. He’s only fucking 20 years old.

Philly would shoot in a goal about 40 seconds after Seider’s goal, and eventually shoot Carter Hart with about two and a half minutes to go and eventually the Red Wings would pick up the goal in an empty net from Michael Rasmussen and put in a big nice salute when of this showdown early Saturday with the Flyers.

This back-to-back with Philadelphia came at the perfect time for Detroit. The Wings needed some points and momentum as they pushed for a wildcard offer. Detroit probably should have controlled the flow of the game more, but the offense made it count when they had the chance.

The next step is a tough game. The Wings are on the road against Minnesota Monday night at 8 p.m.

Rams quickly get back on track for show at Spanish Trail