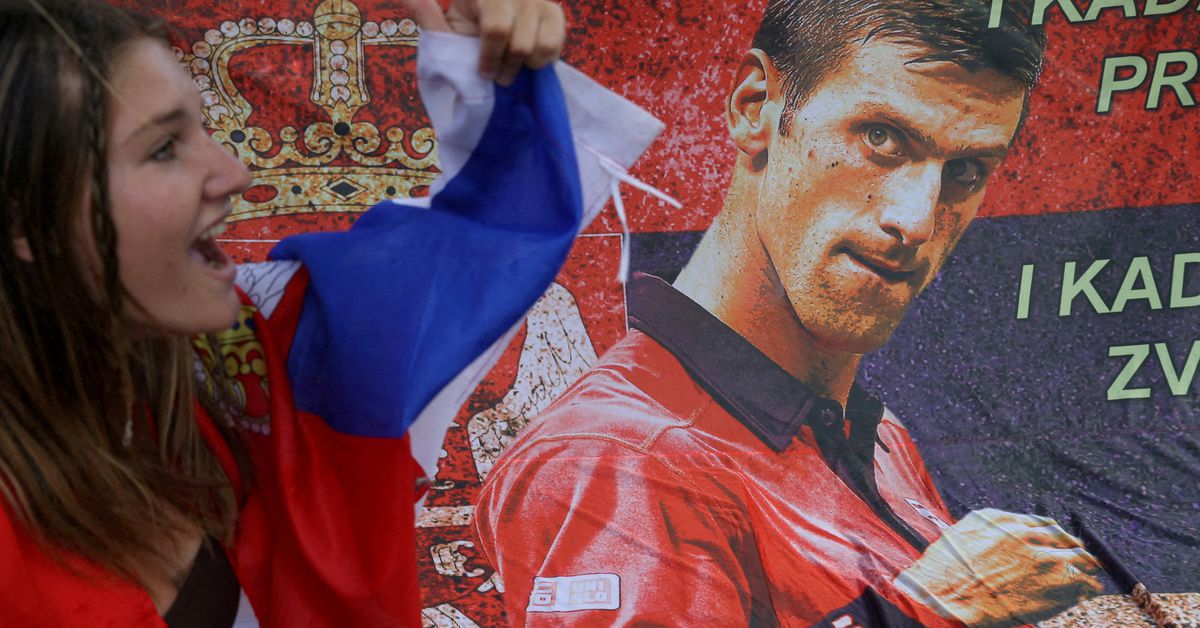 A supporter of Serbian tennis player Novak Djokovic gathers outside the Park Hotel, where the star athlete is believed to be held during his stay in Australia, in Melbourne, Australia January 7, 2022. REUTERS/Loren Elliott

MELBOURNE, Jan 15 (Reuters) – Rafa Nadal said on Saturday that “too many questions” remained unanswered over Novak Djokovic’s bid to play at the Australian Open, while other top players plan lamented how the saga overshadowed the first Grand Slam of the year.

The build-up to the tournament has been completely dominated by world number one Djokovic’s battle to compete at Melbourne Park against a government trying to deport him after twice revoking his visa. Read more

Questions remain over how Djokovic received a health exemption from Australian authorities to play in the tournament without being vaccinated against COVID-19, only to have his visa canceled upon arrival.

Doubts have also been raised over the positive COVID-19 test that underpinned the health exemption, although a Serbian Health Ministry official defended the player this week.

Spaniard great Nadal, level with a record 20 Grand Slam titles with Djokovic and the absentee Roger Federer, said he wished him “all the best” but wanted more details on his case.

“From my perspective (there are) a lot of questions that need to be answered,” Nadal told reporters at Melbourne Park.

“In a way, I think it will be good if everything clears up soon, right?

“I really respect him, although I (don’t) agree with a lot of things he’s done in the last few weeks.”

After having his visa canceled for a second time on Friday, Djokovic will fight to have the decision overturned at a court hearing on Sunday.

His attempt to play the Grand Slam without a vaccine sparked widespread anger in Australia, where 90% of adults are vaccinated. Government efforts to deport the Serb have been widely supported.

However, third seed Alexander Zverev says the Serb was treated unfairly and could have been used as a political pawn by the Australian authorities.

“I don’t think he would have traveled here by chance without thinking he could play, if he had permission to be in the country,” the German said.

“If you had the visa, you would think you would play.

“I think Novak is a really big name, a global superstar. I think he’s someone who maybe people think they can make a fuss about just because he’s Novak.

“The Australian government and the Victorian government should have been clear what was going to happen in advance. I think it’s not very fair for a person to come here and not be able to play.”

Stefanos Tsitsipas, seeded fourth, said the situation has taken the focus away from tennis.

“I’m not going to lie. It’s been pretty much all over the media for the past few weeks,” the Greek said at Melbourne Park, two days before the tournament started on Monday.

“We haven’t talked enough about tennis in recent weeks, it’s a shame.”

Australian Open women’s champion Naomi Osaka has understood Djokovic’s predicament, having felt unease at the center of attention when she withdrew from the French Open following a a row with organizers over mandatory media commitments. Read more

“I think it’s an unfortunate situation. He’s such a great player and it’s kind of sad that some people remember it that way,” the Japanese 13th seed said.

“I know what it’s like to be in your situation in a place where you’re asked about that person, only seeing comments from other players, that’s not the best thing. I’m just trying to stay positive.”

How the Bengals progressed through the NFL playoffs