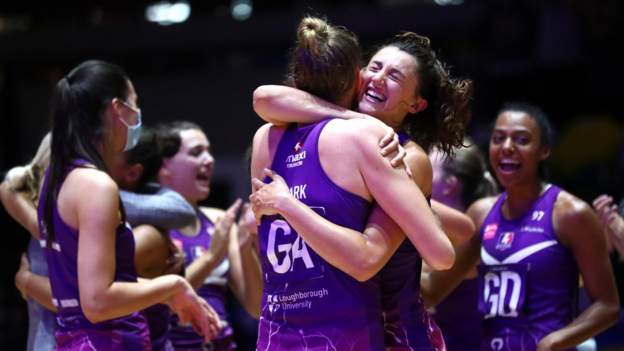 It was a dominant display from Lightning, who beat league newcomers Leeds Rhinos in the semi-finals on Saturday.

Lightning had made the final three times before, but had never won it.

There were 1,000 fans in the grand final at London’s Copper Box Arena, 771 days after the last was won by Manchester Thunder.

Lightning captain Natalie Panagarry threw the ball straight out of the field on her first center pass in a tough opening minutes with nerves evident on both sides resulting in basic errors.

Bath, which beat the reigning champions Manchester Thunder in the semifinals, haven’t made a final since 2013 and were well beaten by the Lightning in the last game of the regular season, finishing third as Lightning took the first place.

A crucial interception from Sam May of Loughborough, who announced his retirement this week, allowed the Lightning to open an 11-7 lead after the first quarter.

Bath’s Rachel Shaw struggled against player of the season Beth Cobden in midfield, but shooters Kim Borger and Sophie Drakeford-Lewis, the league’s most accurate shooting partnership, tried to get back into the game.

A rare Drakeford-Lewis failure with a minute to half time shifted the momentum in Lightning’s favor and a perfectly placed long pass from Hannah Joseph found the league’s top shooter, Mary Cholhok, who carried the his team’s lead to eight goals before halftime. time.

Bath looked panicked and, as Panagarry continued to win the battle against England teammate and Bath center Serena Guthrie, they struggled to find the answers.

Lightning led 31-23 heading into the final quarter, leaving a mountain for five-time champion Bath to climb in 12 minutes.

Lightning continued to increase their lead as Panagarry and Cobden, who returned this season after an Achilles tendon injury, connected with ease.

As time passed Bath knew it was out of their hands and the team that had run the league for much of the season fizzled out.

A bullet fired at Cholhok in the last second of the match was a fitting way to end Lightning’s impressive performance, bringing his team to 49-32, just the second time a team has won the final by more than 15 goals. .

Francis-Bayman, who is only in his second full season at the helm of Loughborough, said they had managed to “shake not only the monkey but the King Kong” from their backs.

“We never let them get too close to us – the girls were there, yesterday we were nervous but today we were calm.”

Captain Panagarry said: “We’re overwhelmed, there are so many emotions – it’s great to finally cross the finish line.

“We were calm, patient with the ball, it was a battle but once we had that lead we felt we were in control.

“It’s like an unfinished business. Lightning made me the player I am and a lot of people rejected us at the start of the season and thought we wouldn’t even make the top four, but we proved them the opposite.”

Thunder faced the newcomers to the Rhinos League in a close fight for third place in the curtain-raiser of the Grand Final.

The Yorkshire-based franchise held the three-time champions at bay for three quarters, two goals behind going into the final period.

But Thunder, backed by a group of traveling fans, pulled away in the final 12 minutes to ultimately win 43-34.

Olympic Games 2020: When do football tournaments start and which teams have qualified?