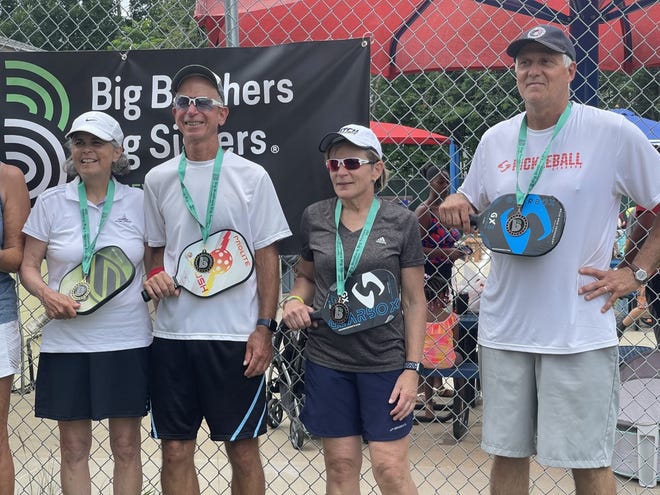 EXETER – The medals aren’t just going to the Olympians in Tokyo this summer. A local pickleball club had their fill of gold, silver and bronze at the state’s first pickleball tournament of the season, in Exeter.

The Midtown Pickleball Club, founded in Portsmouth and comprised of nearly players of different skill levels and ages from across the coastline (Portsmouth, Dover, Hampton, Rye) and Maine, took home 14 medals in total at the two-day event .

Stephen Iandoli and Nick Allen won gold in the men’s 4.0 doubles category on Saturday. In what turned out to be the gold medal match, Iandoli and Allen beat fellow MPC members Dana Pregent and Dana Heaney, who took bronze. The Midtown Pickleball Club finished with three of the top four teams in this division.

“It was exciting to play in this setting,” said Iandoli, who was playing his first pickleball tournament. “We are so used to playing within our club, with very good players and people. But, I think we were all eager to play against new faces. It’s a good indicator of your progress in this awesome game that we all love to play.

“Doing well (in the tournament) was awesome, but that’s really only part of what the game has meant in terms of learning the game and socializing with a great group of local players,” Allen said. .

“I am grateful to have bonded with the Midtown Pickleball Club team. The club represents a variety of dedicated players with incredible pickleball skills. Beyond the club, the tournament player community seemed to have a lot in common and the camaraderie was evident, ”Allen added.

The medal squad continued for the Midtown Pickleball Club on Sunday when Heaney returned to win her second medal of the weekend, gold, in the Mixed Doubles 3.0 division.

MPC’s Larry Crow then teamed up with Ann Rogers (Durham) to win gold in the Mixed Doubles 3.5 division while MPC members Sue Haskell and Pete Litichevsky took bronze in the same division.

“I was a little tense after seeing all the talent there,” Haskell said. “But I felt very supported by friends who watched and encouraged me. It was a great sense of community.

This sense of community is why many pickleball players in the area say they enjoy playing the game so much. Almost 200 players, from across the country, have signed up for the Exeter tournament, with many. more spectators present. The prizes were awarded in 23 different installments during the two-day event.

Wayne Seprini of Portsmouth teamed up with Vinny Marconi (New Castle) on Saturday for a silver in the men’s doubles division (65+) at level 3.5. Marconi also returned the next day to win bronze in mixed doubles (70+), level 3.5, when he teamed up with Susan O’Brien de Rye.

Not to be outdone, MPC’s David DiPierri, also a racquetball star, teamed up with Rhode Island resident Minnie Lewis to take bronze in the Mixed Doubles 4.0 division. It was also DiPierri’s second medal of the weekend.

Hampton resident and longtime tennis coach of Concord High School, Dave Page put an end to the MPC medal harvest when he teamed up with Tao Wan of Moultonborough to take bronze in the mixed doubles division 3.5.

It was the first pickleball tournament hosted by the YMCA of Exeter and featuring players of all ages (19-79) and skill levels (2.0-5.0).

“We planned to start small with our tournament, with 100 participants, but registrations kept coming in,” said Nicole McShane, vice president of philanthropy for BBBSNH. “We ended up doubling our registrations.

The tournament raised approximately $ 13,000 for the benefit of BBBSNH.

“As an organization that charges no fees to families or volunteer mentors for our services, we rely on our annual fundraising events, donations from individuals and businesses, as well as significant funding to support our work. “said McShane. “We are very grateful to the participants, volunteers and sponsors who contributed to the success of our first annual tournament. “