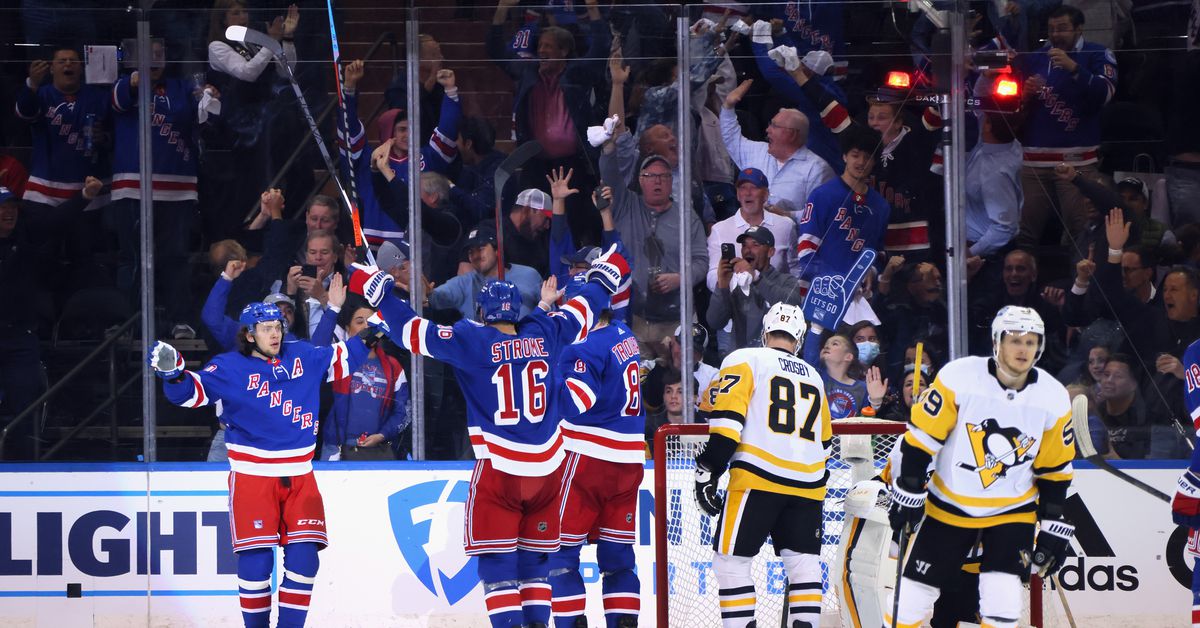 Rangers vs Penguins Game 2: Rangers respond and even series 1-1

After losing Game 1 in heartbreaking fashion, the New York Rangers responded in a big way tonight with a 5-2 victory over the Pittsburgh Penguins. Rangers held a 3-2 lead heading into the third period before a pair of goals from Artemiy Panarin and Frank Vatrano gave New York some much-needed insurance. Igor Shesterkin was solid again for Rangers and kept his team alive with pressure from Pittsburgh early in the game.

Rangers starts have never been a problem so far in the playoffs, and another quick start gave them a 1-0 lead just 6:50 from the start of the opening period. Artemiy Panarin, who had a tough opener with Pittsburgh on him, scored the game’s first goal with a fine through pass. Andrew Copp once got the puck down on one knee and slid into the net after deflecting a defender.

The Rangers held their lead for exactly 2:02 before a Penguins scoring chance ended up in the back of their net. Artemiy Panarin was caught watching the puck in the defensive zone and gave Jake Guentzel a little too much room in the high slot. Marcus Pettersson’s centering pass attempt ended up deflecting off K’Andre Miller’s skate and landed directly on Guentzel’s board for an easy entry.

Rangers got some much-needed momentum early in the second period as Pittsburgh was ultimately only called for their second penalty of the series. New York was scary all season when you gave them a chance to have the man advantage and they delivered again. After the Rangers entered their power-play formation, Artemiy Panarin worked the puck high for a point attempt from Adam Fox. Ryan Strome lined up perfectly with the shot and opened his stick to allow the deflection. Louis Domingue never saw the shot that escaped him and Rangers took their second lead of the night.

Chris Kreider added an insurance scorer just over three minutes later to give Rangers some breathing room on the scoreboard. However, the Penguins were just going to fold and they came back strong in the final two minutes of the period. Sidney Crosby made an incredible play entering the offensive zone and pushed back control from Justin Braun as he headed for the net. Crosby grabbed the rebound after the first shot attempt and slammed the puck between Igor Shesterkin’s legs to make it a one-goal game again.

With Rangers back against the wall to open the third period, Rangers took a huge break with a smooth rebound. Rangers certainly earned that chance too as Artemiy Panarin made a big move around Kris Letang after sniffing out his original shot. Panarin crossed the goal line with speed and ended up deflecting the puck off Mike Matheson and behind Louis Domingue. Just 1:47 later, Frank Vatrano all but froze the game as he flew down the right side of the ice and fired a hard shot under the crossbar to give New York a 5-2 lead.

This game wouldn’t end without some festivities from the Penguins, as Jeff Carter sent MSG into a frenzy after colliding with Igor Shesterkin. Rangers immediately came to the aid of their goalkeeper, who appeared to be in pain, but he eventually got back to his feet after recovering. The Rangers certainly needed the top of the response they presented tonight, and they will head to Pittsburgh with the series tied at 1-1.