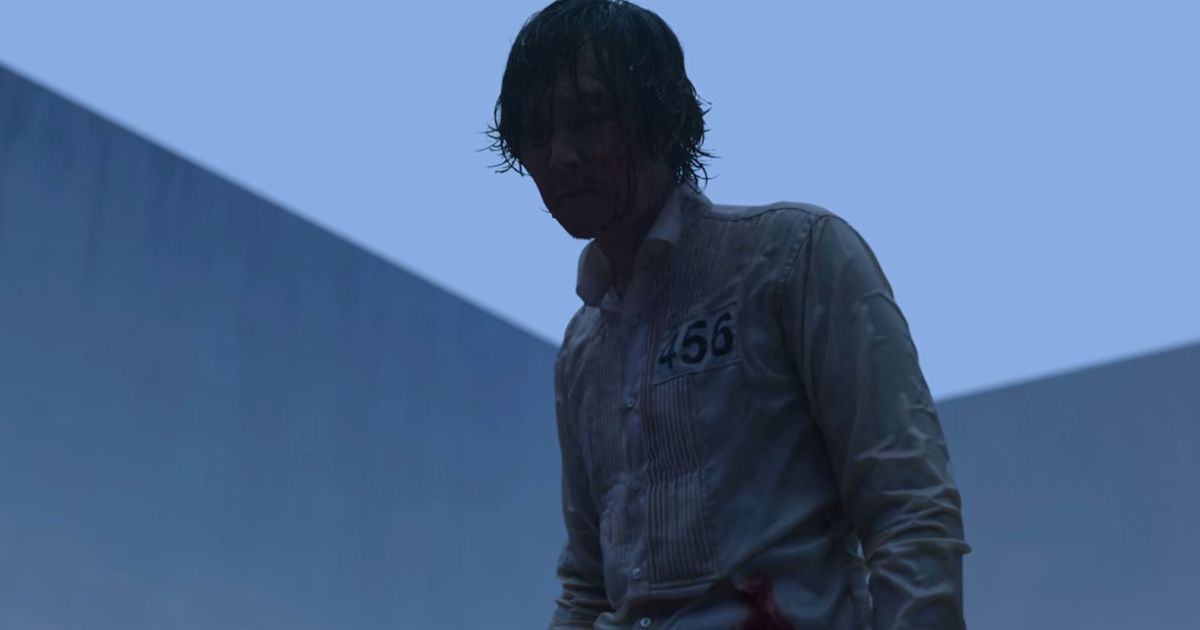 All the artifices fall into the Squid game final. There is no preamble to the final round, no stair room, no “The Blue Danube”. The episode begins with established plans: the squid playground, the two players left on the control room board. Gi-hun wins the toss and chooses the attack (Sang-woo will be on defense) in a dark tunnel, and it looks like the game begins immediately after Sae-byeok dies. So much the better for using Gi-hun’s pure rage before the last turn. Even the VIP skybox is simple, all the sticky decorations are gone. Even they understand the gravity of the final deathmatch.

The final round takes place on the same playing field as the first, but this time Gi-hun takes the offensive. To win, he must reach “the eye of the squid”, former defender Sang-woo, who must push him off the grid. Of course, if one of them were to die, the winner would be the last man standing. Before his first attack, a handful of sand on Sang-woo’s face, Gi-hun reminds Sang-woo that they used to play violent squid game when they were children.

Gi-hun and Sang-woo begin to argue as the rain begins to fall. Sang-woo admits that he killed Sae-byeok to prevent her and Gi-hun from teaming up against him. Gi-hun tells Sang-woo that he won’t let him go with the money. Gi-hun’s rage and determination continue to fight through a blow to the thigh and hand.

Gi-hun ends up pinning Sang-woo and holding the knife to his old friend’s face. But when it comes to killing Sang-woo, GI-hun can’t do it. First, he sticks the knife in the dirt next to Sang-woo’s head and heads for the “squid head” finish line as a guard raises a gun at the fallen player. But before ending the game, he asks the Guardian to vote to end the game and spare Sang-woo’s life.

Gi-hun always had a line he refused to cross, even for 45.6 billion won. He refuses to take a life. Sang-woo was only looking ahead the whole time, doing anything to get through each round to get closer to money and a new life. He has said many times that he cannot go back to his old life without enough money to make his problems go away. As Sang-woo faces the end, he remembers when he and Gi-hun would finish playing and their mothers would call them home. But now there is nothing left to go home. Money was his last chance to save him. He ends the game by stabbing himself in the neck, and his last words are an unfinished plea for Gi-hun to help his mother. Gi-hun doesn’t realize it until he returns to Seoul, but he also doesn’t have a home to return to.

Gi-hun returns to civilization with the Front Man, who toasts him for his victory and compares the deathmatch to Gi-hun’s own game of horse racing, except “you are the horses”. He says he didn’t expect Gi-hun to “run that far.” Before Gi-hun was gassed, the Front Man told him to view the game as a dream that had already passed away, a dream that wasn’t so bad anyway.

Gi-hun is thrown into a Seoul street in the rain; a gold debit card with his earnings stuck in his mouth. (That PIN is his number is its own kind of enduring horror.) He meets Sang-woo’s mother on the way home, who gives him free food and tells him that his mother hasn’t gone. work for two days. She also asks after Sang-woo, a quick blow to Gi-hun’s tender heart. When he arrives in the small apartment he shared with his mother, she is dead, passed away two days ago while he was still playing. With her mother dead and her daughter on their way to Los Angeles, her family left.

With the guilt of the deaths of 456 people hanging over him, Gi-hun emotionally shuts down. In a classic K-drama flash-forward, we see Gi-hun with a depressed beard a year later. He barely spent any money and he has no plans to start now, as he prefers to drink a beer on the bank of the Han River. One night, he receives an invitation to Seoul’s tallest building, wrapped in a black game-like envelope and a magenta knot, from his “gganbu”.

There, Gi-hun finds Il-nam, the old man (001), his playmate. It turns out that he did not die in the round of marbles and that he is the creator of the game. -nam called Gi-hun to his deathbed to play one last game and explain the origin of the game itself. He explains that he and his wealthy clients invented the game because they no longer felt joy, because having everything also meant that nothing could turn them on. The atrocious tournament is purely for their entertainment, as they watch people they consider less than human go through deathmatch. As for joining the game, he wanted to be a gamer for fun, enjoy childhood games, and clear forgotten memories before he died from his brain tumor. As for letting Gi-hun live in the round of marbles, Il-nam says he spared his life because he enjoyed playing with him.

The two men make one last bet. A man freezes to death in the street below them, and they are betting on whether someone will help him or not. Il-nam says no one will, asking Gi-hun again and again, “Do you still trust people?” Gi-hun bet “all he’s got” that someone will save the man. In the end, a person who pulled over for the man earlier calls a police car that arrives to Il-nam’s death. After witnessing a little humanity and the creator’s death, Gi-hun begins his life anew (with a blinding haircut).

Gi-hun finally honors his friends’ wishes, takes Sae-byeok’s brother out of the children’s house and drops him off with Sang-woo’s mother, giving the woman a suitcase full of money. Then he sees the recruiter playing ddakji with a new player on his way to visit his daughter. He calls the Front Man onto the tarmac and demands that they end the game. The season ends with Gi-hun walking away from the plane with conviction, perhaps ready to end the game once and for all.

The very obvious setup for another season has become a trend with original Netflix k-dramas, such as Sweet Home, Love Alarm, and DP, rather than the traditional season of 16+ episodes. While Squid gameThe ending of is a bit awkward, scrambling the end game and Il-nam’s reveal in one episode, I’m thrilled to have the chance to see another season, especially since creator Hwang Dong-hyuk has hinted that a future season could center on Front Man. Throughout the first season, we only got a glimpse of the gamemaster and ex-cop. The revelation that he is Detective Jun-ho’s brother (not to mention the role of Korean superstar Lee Byung-hun) raises a hundred questions.

The end scene Squid game is weird and disappointing because we’ve seen Gi-hun’s story before. The first season ended all player stories. It’s strong enough that Hwang could bring in all the new players, and we would still be hooked. I hope whatever the story of a future season is, it will be as surprising and meticulously imagined as these nine stellar episodes.

• Any clues left about Il-nam’s true identity throughout the series might be his own recap, but the coolest thing is in episode one, when the Red Light doll’s sensors, Green Light does. not fully scan.

• It turns out that each player’s death was announced in episode 2: Sae-byeok put a knife in the broker’s neck; she died of a neck injury. Deok-su jumped off a bridge; he fell to his death. Ali had his salary stolen by his boss; he had his marbles stolen by Sang-woo. Sang-woo tried to kill himself; he ended up killing himself.

• Even Jun-ho and Mi-nyeo had some early days. Jun-ho pushed the body off the boat in episode three, then fell into the water after being shot. Mi-nyeo said in episode five, after an uphill struggle, “Once I rested, I really felt a lot more powerful.”

• Would you survive this game? I don’t think I could fight with a knife in my thigh and a knife in my hand. Besides, I would have died four times by that time.

• You succeeded Squid game! Go outside, touch some grass. Or stay indoors and watch other Netflix dramas. Anyway, thanks for reading!

Watch all the drama from your favorite shows!


By submitting your email, you agree to our terms and privacy notice and to receive email correspondence from us.