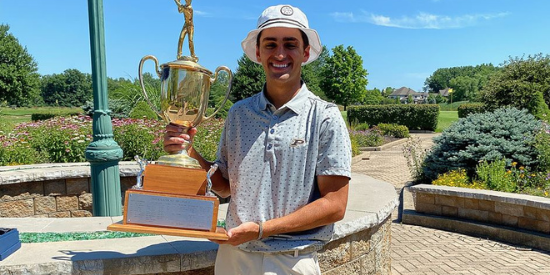 Nels Surtani, an up and coming junior at Purdue, won the Northern Amateur held at Sand Creek Country Club in Chesterton, Indiana on Friday.

Surtani led the tournament from start to finish, totaling 36 holes of 6-under par 210 (68-72-70) on the par-72 layout. Surtani edged Ohio State’s JonErik Alford and Mitch Indiana Davis by three shots for the title.

Surtani led by two shots after Wednesday’s 18-hole opener, shooting a par 68 from 4 under to hold the advantage. He would shoot a par 72 on Thursday to enter today’s final round tied with Davis at 4 under. Through nine holes on Friday, the two remained tied at 5 under par, before Surtani played his back nine at 1 under par while Davis played it at 2 over par.

Davis would take a one-stroke lead with a birdie at 10, taking it to 6 under par, but a double bogey from David at 12 saw him lose one on pace. Surtani then went up three shots with just five holes to play with a birdie at 13, while Davis bogeyed. Surtani would equalize the remaining five holes for his first amateur win.

Surtani’s victory at the Northern Amateur continues a string of strong performances from Purdue players this summer. In June, Luke Prall won the Indiana Amateur while Kent Hsiao won the Sizzler Amateur. His teammates Herman Sekne, Andrew Farraye and Benjamin Cai all qualified out of local qualifiers for the regional qualifiers for the US Open, and Peyton Snoeberger qualified for the US Amateur.

Popular national amateur tournament played from 1967-2001 (with a strong roster of past champions) returned to the program in 2011. 54-hole stroke play championship with a field of 96 players. Par-3 competition organized after the first round.