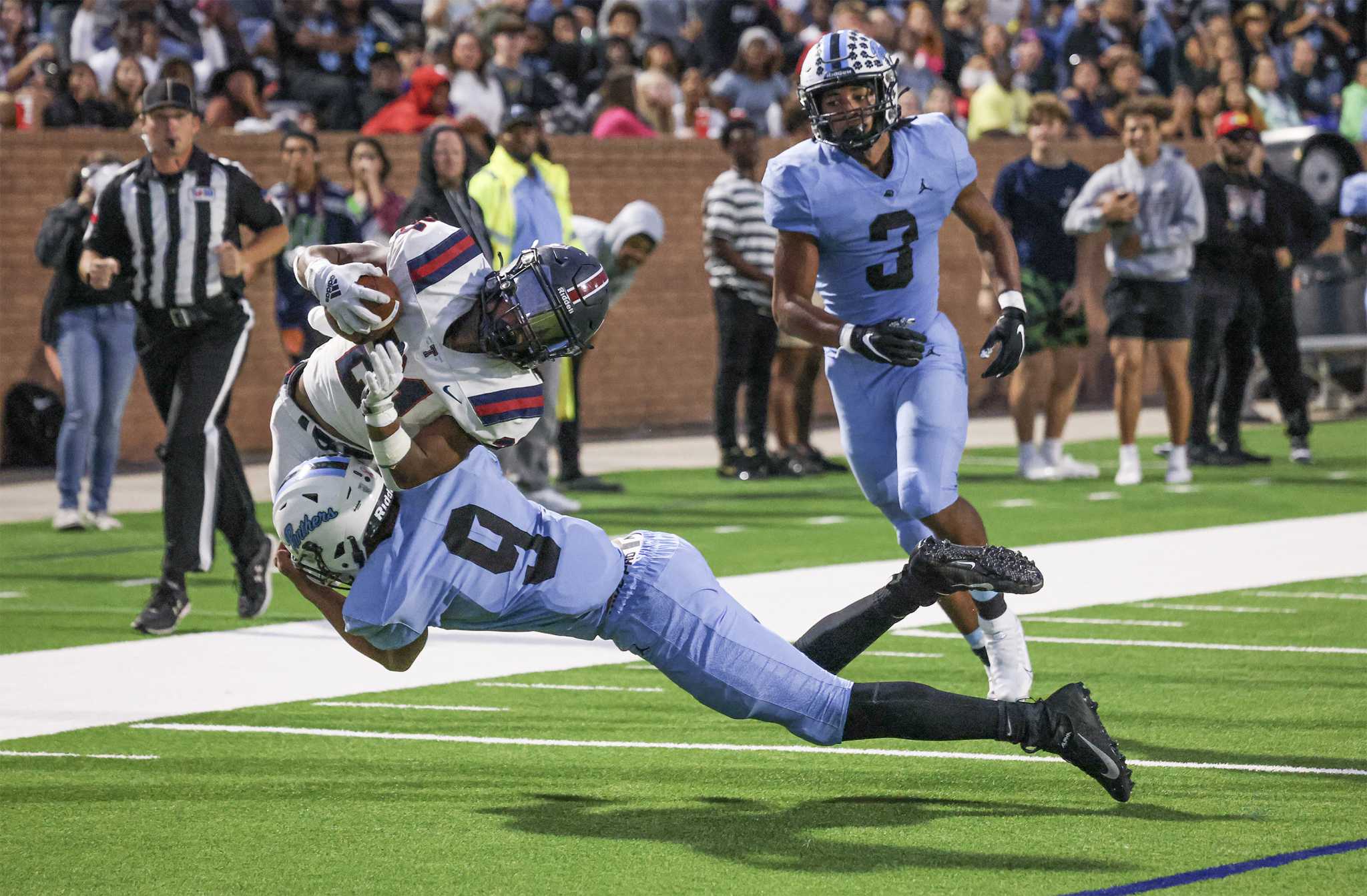 Secured of its own playoff berth, Tompkins’ football team could affect two teams’ seasons on Friday at Rhodes Stadium.
The Falcons beat Paetow 45-14 to knock the Panthers out of the playoffs, putting Morton Ranch in the playoffs as well.

Playoff implications aside, Tompkins used another convincing win to end the regular season on a six-game winning streak. A week after dropping a season-high 65 points to Jordan, the Falcons forced four turnovers and scored three rushing touchdowns and three passing touchdowns to pull away.

“We just came out of the fire,” Tompkins primary receiver Matthew Ogunrin said. “We really wanted to make a statement, more importantly, do our job. We have the plan and we have the players. We just wanted to go and execute it.”

Tompkins scored on his first drive, triggered by a 31-yard catch and led by Noah Coughran. On the third-and-11, Ogunrin hit a cover catch in the end zone for a 24-yard touchdown less than three minutes into the game.

The teams traded turnovers, as Cody Chapman intercepted a through pass for Tompkins and Alexander Kilgore recovered a fumble for Paetow three plays later.

The Panthers capitalized on their turnover, using a 22-yard run on a direct hit to Daymion Sanford to set up a 22-yard touchdown by Koby Truehill.

At fourth-and-one, Truehill burst into the line on a stealthy quarterback and emerged from the pack to score.

Tompkins went 14-7 in his next practice, scoring with five seconds left in the first quarter as Wyatt Young sprinted 24 yards on an option keeper.

After a tackle for loss from Jarra Anderson, Paetow forced another fumble but couldn’t take advantage.

Tompkins rushed for 69 yards in five plays for a 21-7 lead, with 48-yard and 20-yard runs from Caleb Blocker setting up his three-yard touchdown catch with 5:23 left in the half.

Paetow reached Tompkins territory on a 22-yard goalie from Derrick Johnson, but a fumble four plays later was recovered by Sampson Okorafor. Tompkins took a 21-7 lead at halftime.

Tompkins scored on his first two possessions of the second half to extend the lead to 35-7. The tackle sprinted 43 yards from the right tackle, cutting inside a receiver’s block for a touchdown on the third play from scrimmage after halftime.

Tackles for the loss of Rotimi Olayinka and Griffin Simonton, among others, helped knock Paetow down in the duels and set up a 68-yard drive that ended with a diving touchdown from Rhys Phillips.

“It’s all about balance,” Young said. “If we balance our attack very well, they never know what we’re going to do. We can catch them a bit off guard, hit them on the pitch. We can do anything with that attack.”

Jhase McMillan and Braden Foor added interceptions to help Tompkins hold on to a sizable lead, overcoming three lost fumbles, including one recovered by CJ Johnson from Paetow in the red zone.

Despite several negative plays against a strong defense, Tompkins finished with 462 yards of offense.

“Coach (Mark) Hopkins and the offensive staff are doing a really good job of being patient,” Tompkins coach Todd McVey said. “You’ve been working on things all week but of course they’re going to design something else. We just had to set up there and the backs ran extremely hard with the receivers blocking the field again. Wyatt came out and threw good balls. Matt had a great game. It was fun to watch these guys come out and perform.

Tompkins ends the regular season 8-2 overall, 6-2 in the 19-6A district, tied with Cinco Ranch for second place. Paetow concludes his first season 6A 5-5, including a 4-4 district mark. The 2021 Class 5A Division I State Champions rebounded from a three-game losing streak with convincing win streaks for a chance to qualify for the playoffs.

“No bouldering, no bouldering,” Ogunrin said of the importance of receptor blocking. “You just gotta do your job. I love when I see my running backs come out and start running. It makes me really happy. It takes 11 guys to make a play and do something right.”

Tompkins is playing in his fifth straight postseason and has advanced to the regional semifinals in each of the previous four seasons. The Falcons will face District 20-6A champion Ridge Point in the Class 6A Division II Bi-District Playoffs. It will be the Falcons’ first meeting with the Panthers (8-2), who have also reached the regional semifinals or further for the past two years.