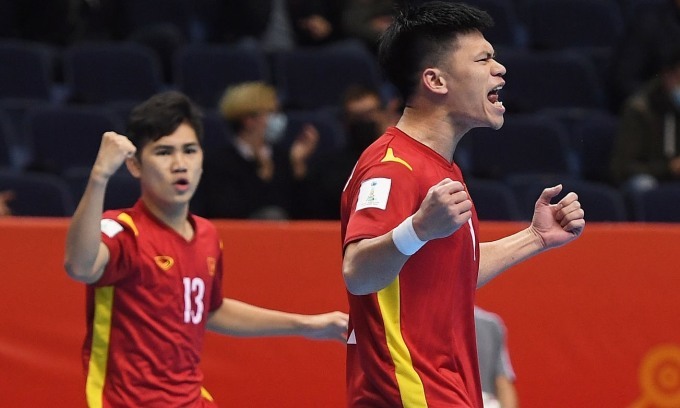 Vietnam (39th in the world rankings) opted for a defensive approach from the start of the knockout match. They had only 28% possession in the first half, while Russia dominated offensively. Vietnam managed to keep their clean sheet in the first 10 minutes, thanks to five saves by goalkeeper Ho Van Y.

In the 11th minute, a nice set-up from the Russian players put Robinho in a comfortable position and opened the scoring for Russia.

Seven minutes later, Russia found its way back to the net. This time Robinho switched to Ivan Chishkala as he finished between the legs of goalkeeper Y.

Just seconds after conceding, Vietnam reduced the score to 1-2. Goalkeeper Y made a long pass for Nhan Gia Hung to lead it into the box. The ball found Nguyen Dac Huy’s header and he finished cleanly to beat goalkeeper Dmitri Putilov.

In the second half, Russia continued to put pressure on Vietnam, but goalkeeper Y was still a solid goalkeeper with many important saves and a little help from the post. However, in the 30th minute, Chishkala dribbled down the left flank and finished in the far corner to score his brace and Russia’s third goal.

Two minutes later, Vietnam had a chance to score thanks to a quick set-up, which put Nguyen Van Hieu in an easy position, but he missed the open goal.

With only six minutes remaining, Vietnam moved to the power play, as Nguyen Minh Tri replaced goalkeeper Y and joined the attacks. In the 38th minute, Pham Duc Hoa won the ball straight into the Russian box and quickly fired a shot to bring the score to 2-3.

A minute later, Tri attempted to shoot from a narrow angle, which surprised the Russian goalkeeper. The ball was slowly crossing his legs but it was cleared by a defender.

Overall, Vietnam lost 2-3 in a game they played very well against a much stronger Russia, who finished second in the last 2016 Futsal World Cup in Colombia.

Five years ago, Vietnam also faced Russia in the round of 16, but lost 0-7. This time Vietnam has shown how much it has improved, causing many problems for Russia.