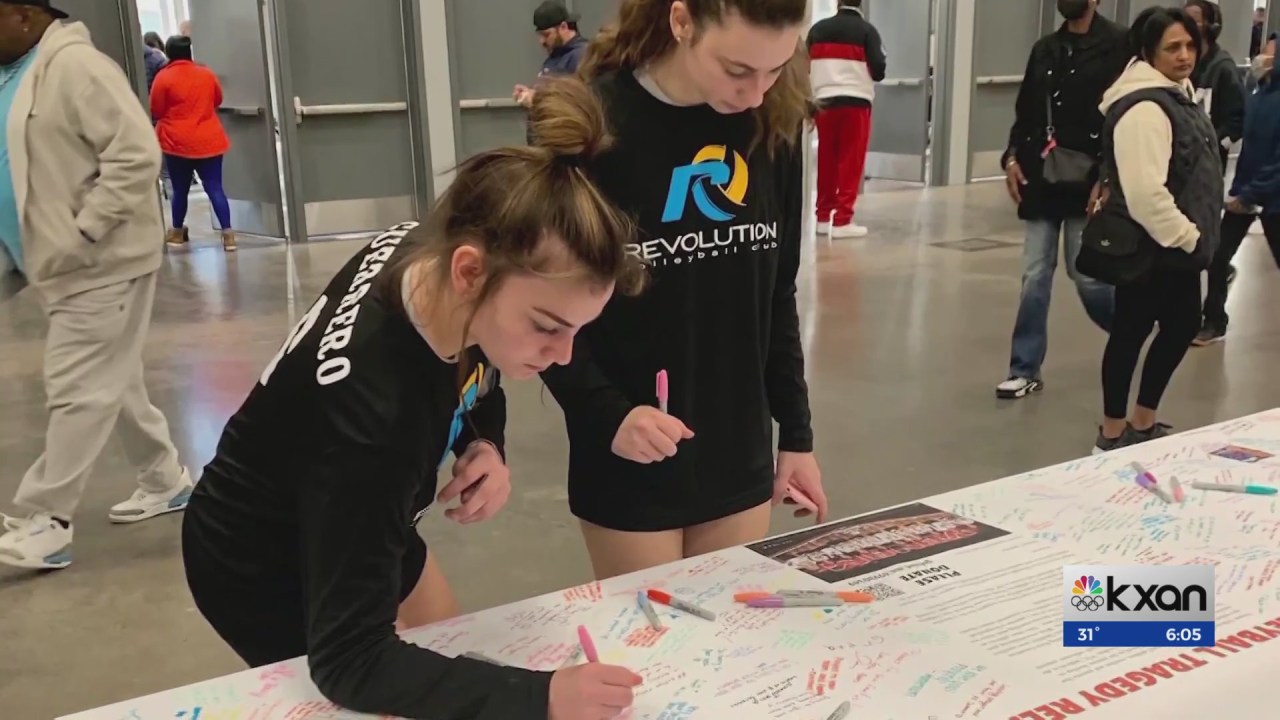 AUSTIN (KXAN) — A volleyball team is mourning the loss of a teammate after a fatal crash during the Texas ice storm this week.

According to an accident report from the Texas Department of Public Safety, a vehicle carrying seven people was caught in extreme weather conditions and hit a patch of ice near Junction Thursday night.

A girl died at the scene, according to the report. The other six people involved were taken to Kimble Hospital for treatment.

According to the DPS report, only the driver and front passenger were wearing seat belts at the time of the crash.

The teenage girls involved in the crash were traveling from their home in Arizona to Austin to play for Venom Volleyball in a tournament at the Austin Convention Center with more than 100 other teams. Many of them had to travel from out of state during the harsh winter conditions.

On Saturday afternoon, the tournament players signed a memorial.

Jimmy Gonzalez, the owner of Venom Volleyball, said when flights to Austin were canceled Thursday, the players’ parents made the decision to fly to town instead.

“They were almost there,” Gonzalez said.

“The road conditions at the time indicated that everything was perfectly fine,” Gonzalez said. “The parents decided to rent an SUV and drive there.”

As the SUV was traveling along Highway 377 near Junction just before 9 p.m. Thursday, the driver lost control, DPS said. The vehicle collided head-on with an 18-wheeler.

“If the road conditions were already in danger, we would have said no. We would have canceled, withdrawn and told everyone to go home,” Gonzalez said. “It’s important for everyone to understand that we need to do our due diligence and make sure safety is the top priority in everything we do.”

After the accident, the Venom Volleyball team withdrew from the tournament.

Two other team players were involved in the accident. Gonzalez said they were both in critical condition.

Before the storm swept through Texas, the Austin Sports Center told KXAN that some of the teams scheduled to play Thursday were rescheduled for Friday afternoon as flights were canceled due to the storm.

The Southwest Boys Classic (SBC) is underway as we change the schedule to move more teams to a Friday afternoon start. The teams are happy to play. Teams whose flights have been canceled for tomorrow have booked for Friday morning. We told everyone to let us know how we can help. The hotels were great too.

There is a GoFundMe posted for the Venom Volleyball team. It has raised over $100,000 since its publication.

“At this time, we ask for prayers and financial support for the three families affected by this tragedy,” Gonzalez wrote. “Funds raised will be used to cover funeral expenses, accommodation, food and medical expenses. In addition, the funds raised will be used to bring our coaches and athletes back to their homes in AZ after a circumstantial package.