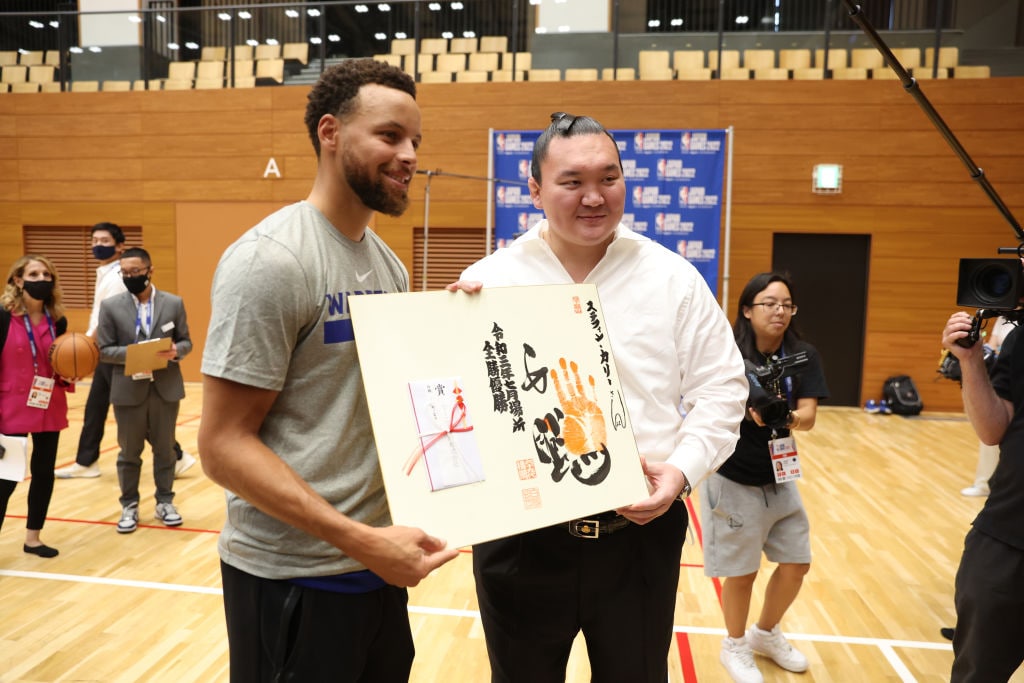 TOKYO (AP) — Before Stephen Curry makes a single 3-pointer, before Rui Hachimura receives his first standing ovation from Japanese fans who have come to cheer on one of their own, the NBA Japan Games is already a huge win in one respect.

Lots of money is circulating — and being spent on — the NBA’s latest foray into Japan, where defending champions Golden State Warriors and Washington Wizards are scheduled to play a pair of preseason games there on Friday and Sunday. Every seat inside Saitama Super Arena has been sold out, and the league has more marketing partners for games in Japan than ever before.

The financial rewards are as clear as the patch from Japanese online retailer Rakuten on the jerseys Curry and the Warriors will wear.

“It’s the Japanese people who grew up with Michael Jordan,” said Junya Ogura, senior director of brand strategy and media at Japanese automaker Nissan. “We are betting on a return that will come in the future.”

Now every seat has been taken. Additionally, the NBA has attracted 15 marketing partners to support preseason games in Japan, including American Express, Hennessy, NEC and Nike, and now has 19 marketing and promotional partners in Japan.

“Building the fan base in Asia, and everywhere else in the world, translates to more sponsorship dollars, increased media rights and increased merchandise sales.”

The NBA may have more global appeal than other American sports, being easier to understand than football, for example, according to Dorfman, who worked in Japan.

“Every team has foreign-born players on their rosters, and the league’s top stars are cultural icons, trend setters and social media giants. The game is cool,” he said .

This translates not only into sponsorship money, but also into young people spending on sneakers and other fashion items and merchandising.

Between 1990 and 2003, the NBA hosted 12 regular season games in Japan. The courtship between the NBA and the Japanese fan – not to mention Japanese businesses and NBA fans around the world – is now on again.

A giant 3D screen at a Tokyo intersection depicts Curry and other NBA stars as “manga” or Japanese comic book characters. The NBA’s Japanese language social media accounts have amassed over 1.6 million followers.

While players are in town, they will participate in various fan events. Besides Hachimura, the NBA now has another Japanese player, Yuta Watanabe, who is with the Brooklyn Nets.

The NBA is also excited about the potential of women’s basketball. The Japanese were silver medalists at the last Olympic Games. Rui Machida, an Olympian, signed earlier this year with the Washington Mystics of the WNBA.

“Our fan base is growing,” NBA Asia general manager Ramez Sheikh said. “There’s a real dynamic around basketball in Japan, and it’s a real big market for the NBA.”

Wizards officials admitted they were surprised by the big reaction Hachimura drew from Japan. They suddenly saw more Japanese people in the stands, tour buses started arriving, and Japanese media showed up in droves.

“It was all about Rui,” said Hunter Lochman, chief marketing officer at Monumental Sports & Entertainment, owner of the Wizards. ” It’s quick. It’s a high score. It’s a big sport and it’s a global sport.

Besides Japan, two pre-season games are scheduled for Abu Dhabi this season, with the Atlanta Hawks and Milwaukee Bucks traveling there early next month. Regular season games will be played in Mexico City in December and in Paris in January.

Wizards forward Kyle Kuzma said he was thrilled to be in Japan for the first time.

He already had sushi, planned to go shopping and was approached by a fan on the street, who gave him chopsticks with his name and his girlfriend’s name engraved on them.

Will Titanfall 3 ever be released?