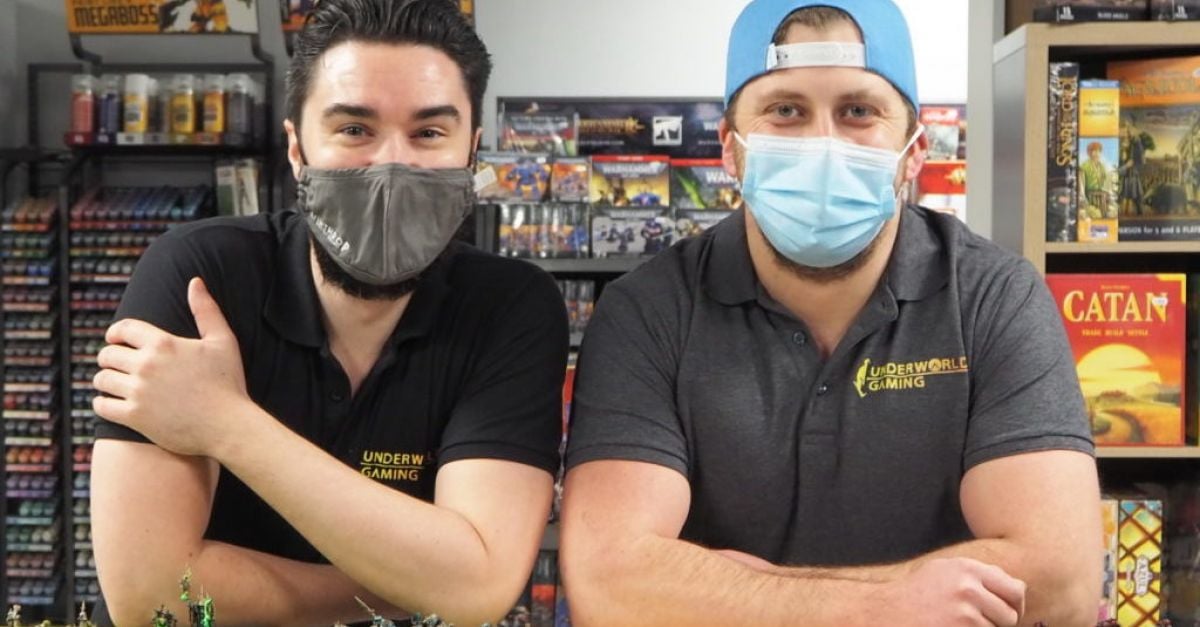 ‘We want to position ourselves as community builders’: Dublin’s newest gaming hotspot

Ghouls, goblins and orcs are on the menu at Underworld Gaming on a dark Saturday afternoon.

People from all walks of life and all over the country come to the store to enjoy their favorite hobby. While some revel in the creative side of board games, others are drawn solely to the competitive side of things.

Every corner of the store is a visual treat, as there is a Warhammer: 40,000, Magic: The Gathering, Star Wars: Legion, and Yu Gi Oh tournament. Each game has distinct characters and environments that make them instantly recognizable.

For co-owners Michael Wendell and Nathan Sandison, they wanted to create a space where people can play games together and help build a sustainable community.

â€œWe first met at a place called Games Workshop in Dublin city center, that’s where we started playing togetherâ€¦ and against each other,â€ said Michael.

They were playing at Wicklow’s War Room, but due to Covid it had to close. So, with no space to play, they came up with the idea of â€‹â€‹creating one themselves.

Ease of access was a big deal when it came to a location, so downtown was never really an option. â€œOur bread and butter are people from Dublin, but we also have people from Kildare and Wicklow.

â€œOne of the reasons we chose Tallaght was because it was an easy place to travel for people living in West Dublin,â€ says Michael.

While the storefront is a traditional retail space, there are tons of tables for tournaments and events, or for those who just want to play board games with friends.

Since opening in September, it has become a real hub for the Dublin and surrounding player community. The emphasis is on a different game every night, so they try to encapsulate every part of the community,

Just looking around the room you see the rugged terrain of Jakku from Star Wars, the high fantasy setting from Warhammer: Age of Sigmar, and the dark haunting world of Dungeons and Dragons.

No matter what game you are in, their goal is to be a place for all gamer tastes.

Michael says â€œnormally you see people in their twenties and thirties, but the other day a mother and her two children walked in and started playing games. Her children could not have been more than 10 or 12 years old. It was really nice to see. “

What we want to do is have a space open to all ages and all walks of life. We really want to position ourselves as community builders.

â€œWhat I always find is that people (who play games) are very tolerant, and all they want is for the community to grow,â€ says Michael.

The sense of community extends even to the establishment of the store itself. Michael and Nathan both have full-time jobs, so they got help from other players to get the store up and running.

Whether it was breaking down walls or installing cabinets, those who helped were investing in the future of their community.

They also let people follow their journey with videos on TikTok, which in turn was a good way to promote the store when it opened.

Underworld Gaming also wants to foster a community through partnerships with Irish creators. They’ve partnered up with Dakota Irish dice makers who make custom dice bags that you can buy in store.

They are also the only store to carry a new board game called ActiVacation, created by Ursula Kane Cafferty from Westmeath. This relationship with the best of the Irish is something they hope to develop over the next few years.

In terms of membership fees, you can pay â‚¬ 20 per month or â‚¬ 200 per year for as many games as you want. Although right now it’s cheaper than paying $ 5 each time you show up, they intend to expand the benefits.

Nathan says, “The idea is that later on we will have lockers where people can store their miniatures. There are already a lot of parts that are free to use, and other players are happy to make them available.”

We have no idea how to get rich here, me and Mick both work full time. The ultimate goal is for it to be autonomous.

As business owners, they understand the potential for growth, but their approach right now is to let the community lead them.

â€œIf we can get enough of it to keep the lights on, we’re happy with it,â€ Nathan says.

They currently employ four people (two full-time and two part-time) and a fifth member will join the team shortly.

The main thing they are looking for are people who not only have great knowledge of games but also have great relationship skills.

â€œOur staff are going to be community champions. They need to be able to point people in the right direction, but also be able to answer all of their questions, â€Nathan explains.

As with any hobby, there will always be a learning curve and if you get overwhelmed early on you are more likely to drop out.

This was something Michael and Nathan were very much aware of when founding Underworld Gaming. As Michael says, â€œWe want to have games on display, so that we can show people how to play them and demystify things.

â€œWe encourage people to come back and show them how to play, how to paint and accompany them every step of the way. “

Warhammer: Age of Sigmar board game

One of the most interesting things about board games is the way people tend to hide the fact that they are doing it.

There are celebrities who are proud of gaming nerds like Superman actor Henry Cavill who is a huge Warhammer fan, while Vin Diesel and Helen Mirren are great Dungeon and Dragons players.

As Michael and Nathan can attest, it really is a great way to meet new people and detach yourself from the world for an afternoon.

â€œThere’s a huge element of escape and with two years of people looking at screens it’s great to see the game in person,â€ Nathan said.

Another plus is that people who are more reserved in their private lives really come out of their shell when they step into role-playing as a character.

Although it has only been open for a few months, Underworld Gaming is already an integral part of the gaming community. While they have no plans for expansion at the moment, they have considered opening another store in the Northside, but only when the time is right.

At the moment however, they are happy with the way things are “to be honest we still have a lot of room to grow here. Our main philosophy has always been to build community, so if good things come out of it, it will be good. ‘is awesome, “Michael says.