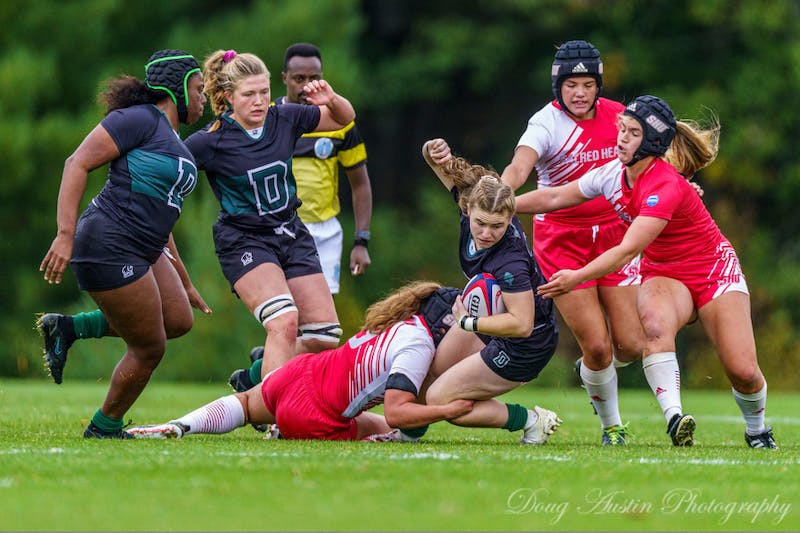 The competitive team played their first 7-a-side games since 2019, highlighted by a 50-0 rout of Sacred Heart University.

Women’s Rugby returned to the field on Saturday April 2 to compete in the Crimson 7s Tournament, the Big Green’s first 7s competition since 2019. Competitive and development teams competed, with the competitive team placing third overall and the development team coming out with two wins and one loss. This competition kicked off the 7s season for the Big Greens, who are looking to win another national title after winning the 15s championship last November.

The competitive team defeated Mount St. Mary’s University in the first round of the Crimson 7s tournament, with Anjali Pant ’24, Sophie Ragg ’22 and Sadie Schier ’25 each scoring a try.

The Big Green then crushed Sacred Heart University, winning 50-0, before losing to Army West Point in the semi-finals – which they beat in the Nationals of 15 last November.

With this match being 7’s first competition in over three years, the team worked hard to prepare for the pace, intensity and conditioning required for the competition, according to Emily Henrich ’22. Another focus was on experimenting with different skills and games.

“This first tournament was largely about ironing out the issues of not having played a 7 since 2019,” Henrich said. “I think it was just a good tournament to try things out, try new combinations and really just figure out what kind of team we want to look towards the rest of the 7s season.”

Being the defending national champions puts the Big Greens under some pressure to succeed – which was certainly illustrated when they faced Army in the semi-finals of the Crimson 7s tournament. Pant said the stakes are higher this season.

“Individually we’re much harder on ourselves,” Pant said.

This pressure also acts as motivation for the team to continue to grow and improve, said Nicole Ihensekhien ’24, who captained the development squad last tournament.

“I feel like when we walked in [to the tournament] everyone knew we were Dartmouth, and we have a target on our backs – which honestly makes us play better because when other teams bring the intensity, we improve so much,” Ihensekhien said.

Not only was this tournament new ground for the most experienced players on the competitive team, but it was also the start for new players on the development team: Allie Amerson ’25, Adrienne Coleman ’25, Ella Gates ’24 and Kyla Widodo ’25. scored points in his first 7 appearances, setting the team up for success at the start of the season.

Henrich described the dynamics of the team as new players teaching veterans and invigorating the team, and older players leveraging their experience to become mentors and leaders.

“A special moment for me was playing with our new players,” said Sarah Korb ’22. “For many of them it was their first rugby game.”

Many of the more experienced players shared this sentiment, expressing a sense of pride and excitement to see new players succeed.

“The highlight for me was definitely seeing our three goalscorers score [and] play make in our game,” Ihensekhien said.

While women’s rugby, like all other Big Green teams, has seen its seasons impacted by COVID-19, the team has remained resilient and hungry for another domestic title this spring. Next month, they will face new competition outside of the Ivy League conference.

“I’m really excited for the national championships which are in the middle of May and to really have a high level competition against teams that we have never played before,” said Ihensekhien.

On April 16, the Big Green will face Sacred Heart and Quinnipiac University in 15 seconds. The following weekend, Dartmouth will compete in the Ivy 7s Tournament at Harvard University.